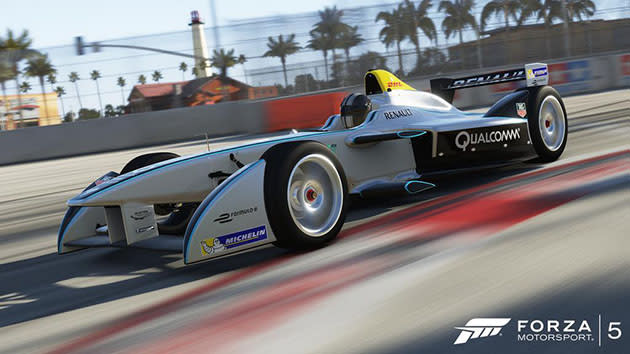 Turn 10 has just revealed that it'll bring the hum of electric power to Forza 5 with the Spark-Renault SRT-01E racing car. That'd mark the first EV from the fledgeling Formula E racing series in any game -- in fact, the actual series itself won't launch until September 13th in Beijing. The Spark-Renault SRT-01E was the first car to be homologated by the FIA for Formula E, and features a 200kW (270 bhp) motor and 888 kg (2,000 pound) curb weight. As you were likely wondering, it also produces about 80 decibels at full power -- that's a bit more than your car, but far, far less than the 140 screeching decibels of a pedal-to-the-metal Formula 1 racer. There's no word on when it'll arrive to Forza 5, but it would make sense to co-launch it with the Formula E series in Beijing next month.

In this article: Formula E, FormulaE, Forza 5, Forza5, Gamescom2014, microsoft, Renault, Spark, XboxOne
All products recommended by Engadget are selected by our editorial team, independent of our parent company. Some of our stories include affiliate links. If you buy something through one of these links, we may earn an affiliate commission.