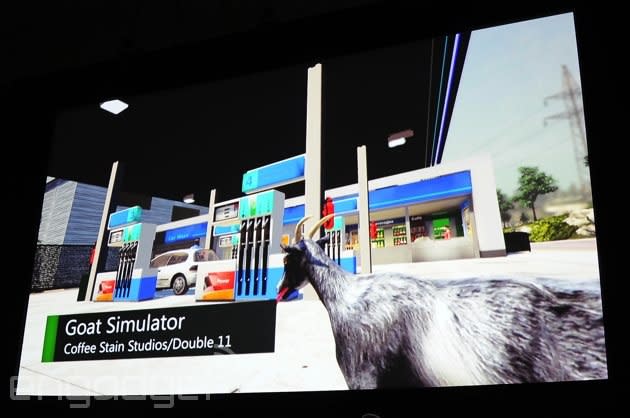 You may not have heard of Goat Simulator, but yes, it's really a game. And hey, it's apparently coming to Xbox One! The bizarre "game" has you piloting a goat, causing trouble all over town. Chris Charla, head of the Microsoft indie game program at Xbox, introduced the game among a lengthy list of other indies that are "coming to console first on Xbox One." Among them is hit mobile game Threes, innovative and insane first-person shooter Super Hot, and Worms studio Team 17's latest work, The Escapists.

But when will all these games arrive? It looks like at least a few will arrive this year, though no specific dates were given out at Microsoft's Gamescom 2014 presser (which is where we are right now, in case that wasn't clear). We'll have more from Microsoft's event as the day goes on!

In this article: gamescom2014, hdpostcross, microsoft, xbox, xboxone
All products recommended by Engadget are selected by our editorial team, independent of our parent company. Some of our stories include affiliate links. If you buy something through one of these links, we may earn an affiliate commission.