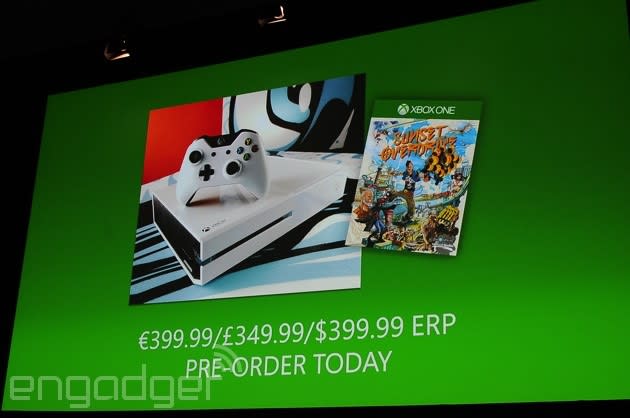 The rumors are true: there is a white Xbox One game console on the way, and it's arriving alongside Xbox One-exclusive Sunset Overdrive. And the console isn't the only white bit, as there's a white gamepad coming too. It'll cost $400 when it arrives this October, and it comes with the standard 500GB of storage and the aforementioned gamepad. The bundle appears to come without Kinect, though we'll be sure to ask Microsoft as soon as this Gamescom 2014 press conference is over.

In this article: gamescom2014, hdpostcross, microsoft, sunsetoverdrive, whitexbox, xboxone
All products recommended by Engadget are selected by our editorial team, independent of our parent company. Some of our stories include affiliate links. If you buy something through one of these links, we may earn an affiliate commission.