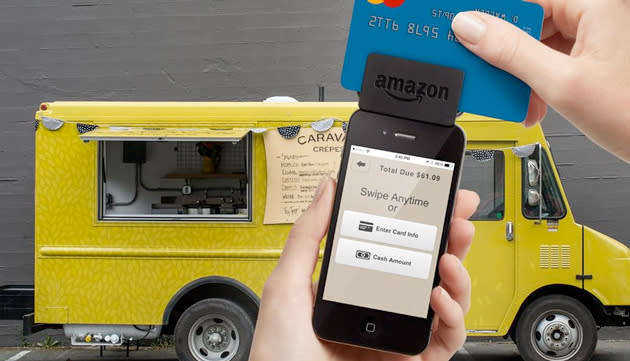 Square's grand plan to democratize credit card payments has inspired a clutch of imitators, the latest of which is Amazon. The company has just announced Amazon Local Register, a credit card reader and app combination that'll enable small businesses to take payments they wouldn't otherwise get, as long as they have a smartphone or tablet lying around. The retailer is savagely undercutting both Square and PayPal Here, offering a flat charge of 1.75 percent per payment until the start of 2016, a full percent lower than the 2.75 and 2.7 percent asked by the other two. On January 2nd, however, the fee rises to 2.5 percent, a smaller yet still significant cut compared to Amazon's rivals in the space. The gear's available for Android, iOS and the company's own Fire devices, priced at $10, and there's even a business bundle for $380 that'll include a Kindle Fire HDX 8.9 -- which we figure is a whole lot cheaper than trying to install a cash register in your taco truck.

In this article: amazon, Amazon Local Register, GoPayment, Local Register, PayPal Here, Square, SquareReader, video
All products recommended by Engadget are selected by our editorial team, independent of our parent company. Some of our stories include affiliate links. If you buy something through one of these links, we may earn an affiliate commission.