Wearables of the future may use reflected WiFi signals to communicate 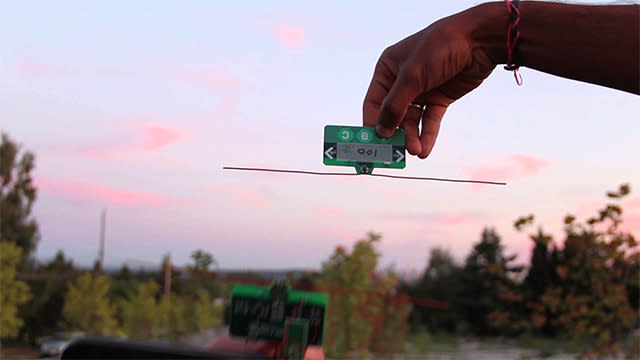 Let's face it: our gadgets are growing smaller and smarter by the way, and making sure they've got enough power to get us through a day or two is no small feat. That problem wasn't lost on a team of researchers from UCLA and the Jet Propulsion Laboratory -- they've spent the last two years cooking up a way for a device to communicate with a WiFi router by reflecting the very signals it sends out back at it. The end result? An incredibly low-power way for future wearables (or other tiny gizmos) to send data back and forth.

The beauty of so-called ambient backscatter devices like these (see one example above) is that they don't require a transmitter, or even a battery in some cases. All of that communication is handled by tweaking and reflecting ambient carrier waves that are already bouncing around anyway, be they television signals or (in this case) Wi-Fi networks. That's all great, but how well does the process actually work? Well, the UCLA team was able to create reflector links with data speeds of up to 3 Mb/s between a test device and a signal source about 8 feet away, and they're confident that more signal tweaking could eventually get that range up to 65 feet. Neat as this all is, there's no telling if or when a wearable maker will ever even run with the ambient backscatter approach. If we're lucky, Google's willingness to talk turkey about the tech means it's interested in baking some version of it into future devices. We're not exactly holding our breath, but hey -- we wouldn't mind being pleasantly surprised, either.

In this article: ambientbackscatter, mobilepostcross, reflection, wearable, wearables, wifi
All products recommended by Engadget are selected by our editorial team, independent of our parent company. Some of our stories include affiliate links. If you buy something through one of these links, we may earn an affiliate commission.