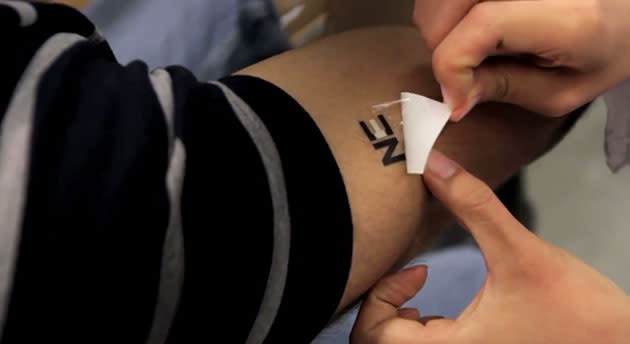 What if running a 5K could do more than just burn calories? A team at the University of California San Diego have developed a temporary tattoo-like sensor that keeps tabs on exercise and converts sweat into electricity. The removable device monitors lactate: a substance that's present in perspiration and increases with more strenuous the activity. Athletes and some medical patients need to keep an eye on lactate levels for a range of reasons, but testing currently involves an invasive blood test during an exercise session. Here, an enzyme on the sensor collects electrons from lactate, and in turn, generates a modest electric current. What's more, the researchers turned those findings into a biobattery that's powered by the collected charge. The most energy produced by one person during the test was 70 microWatts per square centimeter of skin, but work is already underway to boost the system so that if can be used to power small gadgets like watches and heart-rate sensors.

In this article: battery, biobattery, lactate, sensor, sweat, tattoo, temporarytattoo, video, wearable
All products recommended by Engadget are selected by our editorial team, independent of our parent company. Some of our stories include affiliate links. If you buy something through one of these links, we may earn an affiliate commission.