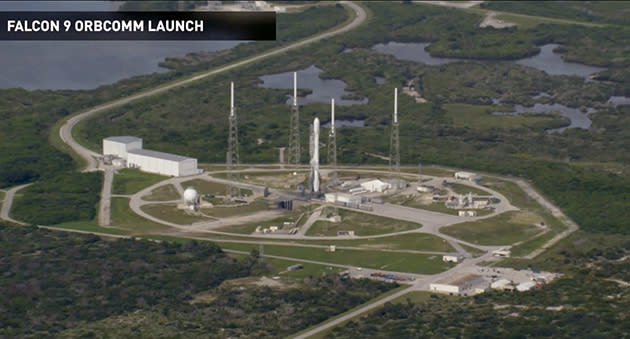 Back in mid-July, one of SpaceX's two-stage Falcon 9 rockets blasted off from Cape Canaveral to deposit a series of 6 Orbcomm satellites in low earth orbit. In case you're not terribly familiar with how these things work, it's the rocket's first stage (and its 9 Merlin 1C engines) that does most of the heavy lifting, and SpaceX hopes that these expensive boosters can be recovered and reused. We caught a glimpse of that particular Falcon 9's first stage splashing down in the Atlantic Ocean thanks to a camera mounted on the rocket itself, but SpaceX posted a video today that gives us a look at the events from a different angle -- specifically, from a chase plane coming along for the ride. Sadly, the plane lost sight of the first stage just as it tipped over and fell into the water, but the rest of rocket's journey was well documented. Hitting the water compromised the booster's hull, though the data collected gave SpaceX confidence that it'll ultimately be able to land one of these things safely on dry land.

In this article: falcon, falcon9, grasshopper, reusable, rocket, space, spacex, video
All products recommended by Engadget are selected by our editorial team, independent of our parent company. Some of our stories include affiliate links. If you buy something through one of these links, we may earn an affiliate commission.