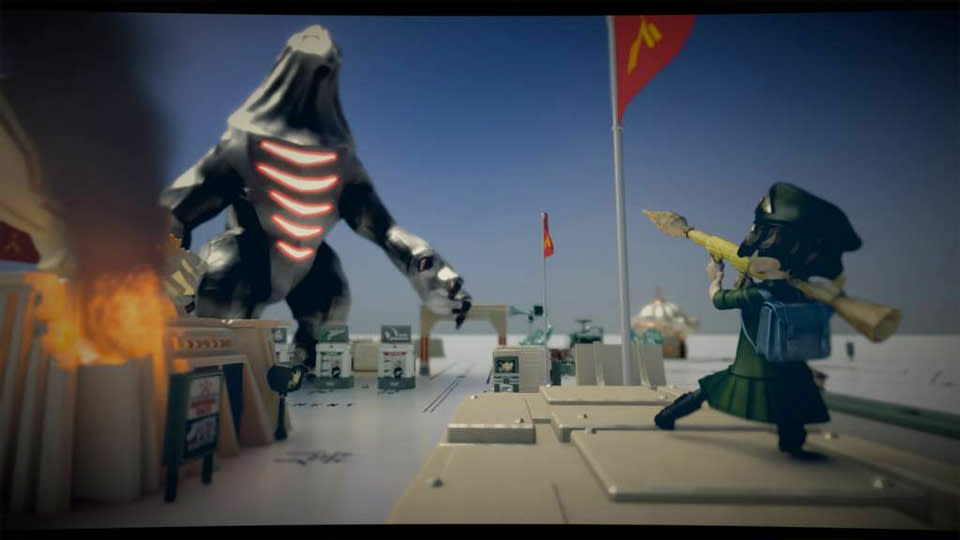 "It's important to me to be able to express what I want to express." These words come from Dylan Cuthbert, "Game Designer/Programmer/Anything" at Q Games, as he explains how his team came up with the back story for The Tomorrow Children. The forthcoming title is -- by Cuthbert's own admission -- a little bit "out there;" a mix of Minecraft-esque collaborative building, social economics and a Soviet Union-themed post-apocalyptic dystopia. It's definitely a little on the fringe. Multiplayer shooters and herculean protagonists have their place, but, as Cutbert alludes to in his gambit above, it's probably not here. Indie doesn't mean small though, and The Tomorrow Children, I learn, is an example of how companies like Q Games can keep to their own script (or lack of), and still benefit from the considerable support afforded by a partnership with Sony.

Earlier, during a preview session for The Tomorrow Children, the game is described as a "Marxism simulator." The backstory? An experiment to unite all human consciousness went terribly wrong, destroying society. Over the following decades the few survivors try to rebuild humanity. Your role is to venture out into "the void" (the empty space left by the experiment,) and build a new world. Oh, there are also giant creatures to contend with that you kill and mine for materials. Y'know, all that usual stuff.

The off-beat storyline is accompanied by equally expressive artwork. Cuthbert tells me it's inspired by sources as diverse as (among other things) old Czech puppetry, and the 1960s British drama The Prisoner. The result is cinematic, in a vintage French art house kind of way. Cuthbert is keen to point out that a lot of these decisions weren't planned up front (as would be required by a AAA studio,) and that one of the main privileges of being independent is being able to, basically, do what you want. But there's a paradox. The Tomorrow Children is an indie title in spirit, but Sony is financially involved with the project. So, how does this reconcile with Q Games' approach to game making? According to Cuthbert, it's not only not a problem, it's for the greater benefit of (his company's) indie games.

"I think it doesn't matter what size the game is [financially], as long as it's an expression of the creator... and it hasn't been meddled with... We just really enjoyed creating the technology [for the game], and obviously to create that technology we needed a bigger project to kinda buoy it up."

"From the start, Sony was positive, said start experimenting and they were hands off. They just let us do anything we wanted basically." And the result speaks for itself. How many other blockbuster titles have you opening Matryoshka dolls to collect DNA to rebuild your population? "In this game we've explored more 'different' ideas than we ever have before" says Cuthbert. Suggesting that despite dealing with suits doesn't have to mean compromises. So, perhaps money and indie spirit aren't so mutually exclusive after all?

The Tomorrow Children will be available in the coming months on PlayStation 4.

In this article: dylan cuthbert, gamescom2014, playstation 4, sony, the tomorrow children
All products recommended by Engadget are selected by our editorial team, independent of our parent company. Some of our stories include affiliate links. If you buy something through one of these links, we may earn an affiliate commission.