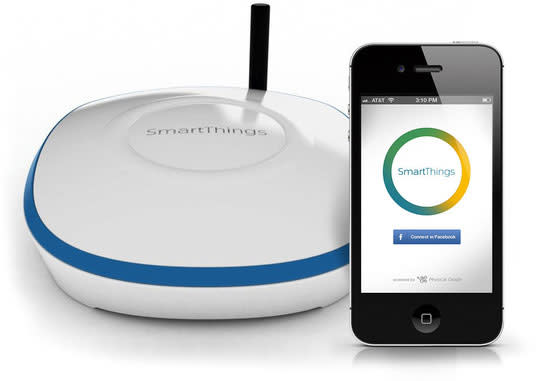 Count Samsung in -- it's officially purchasing home automation startup SmartThings, a move that should help it keep up with the Joneses, aka Apple and Google. TechCrunch has sources confirming a $200 million pricetag, matching the amount it heard last month when rumors of the deal leaked out. In a blog post, SmartThings CEO Alex Hawkinson said the team would continue to be run independently, but that it's moving home base to Palo Alto, where Samsung has one of its Innovation Centers. He says Samsung is ready to get behind its vision of an open smart home platform that works for third party devs as well as different hardware manufacturers, and already has support from some 8,000 apps. SmartThings has gone from Kickstarter to playing with the big boys, now we'll see if its Hub device and wide-open strategy can get your doorknob, stove, drapes and lightbulb all on the same page.

The next big thing is already here: @SmartThings, @Samsung, and the Open Platform: http://t.co/94ZNhfIos8

In this article: acquisition, HomeAutomation, samsung, smarthome, smartthings
All products recommended by Engadget are selected by our editorial team, independent of our parent company. Some of our stories include affiliate links. If you buy something through one of these links, we may earn an affiliate commission.