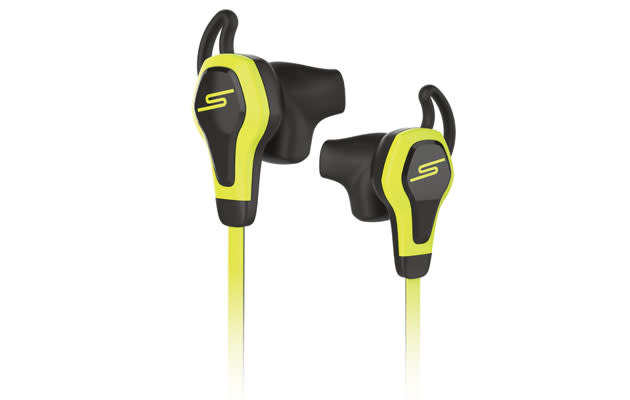 Back at CES, Intel showed off its smart earbud concept that matched tunes to your pulse, and now it's bringing similar tech to the masses. Thanks to a partnership with 50 Cent's SMS Audio, the heart-rate-tracking chops will hit the gym inside the headphone maker's new BioSport offering. Looking to "motivate and encourage" peak activity levels, the in-ear option packs a biometric optical sensor needed to monitor both physical exertion and relaxation. What's more, the audio add-on syncs the collected data with RunKeeper to keep tabs on progress, and as you might expect, the pair is IPX4 certified for sweat and water resistance. So how did the collaboration come about? Well, I had a chat with Intel's New Devices Group head Mike Bell and SMS Audio President Brian Nohe about just that.

If you'll recall, SMS Audio revealed the first sweatproof devices in its Sport line back at CES, and now, with the new BioSport earbuds, it's adding to the options in that series. In terms of design, the earbuds have a hook shape that helps keep them in place, and they grab power from your phone's 3.5mm jack. As you might expect, the two companies tout the convenience of not having to strap on (or carry) a third device to keep tabs on your pulse while you're at the gym. And there's a tangle-free cord and in-line controls here, too.

"This project between our two companies is a much further refinement of that hardware you saw at CES."

SMS Audio had been working on sport-focused portable audio devices, but in addition to regular options, it sought to add in the biometric component that would offer increased value to those looking to keep track of physical activity. Nohe told me the product came about pretty quickly due to Intel's wearable-minded department and both companies' interest in moving rapidly. "This project between our two companies is a much further refinement of that hardware you saw at CES. We've been able to take the same basic electronics, but use SMS' expertise in fit, sound and sweatproof materials," Bell said, when asked about Intel's prototype.

Bell went on to say that similar devices require proprietary software that locks you into one company's ecosystem, so to avoid that scenario, the device will support the popular RunKeeper app at launch. He did say that the demo music-changing app is still on the shelf, but didn't tip off an official release, although more software compatibility is in the works. "We were really intent to bring most of the stuff, if not all of the stuff at CES, to market and we needed a partner who complemented us and really knew the market," Bell continued. "And we were looking for the best."

"We spent a lot of time on materials -- as we do with all of our products. SMS is really known for the quality and durability -- it's something that 50, when he first started the company, made sure was there," Nohe explained. So, what about a wireless option? Well, the headphone maker has found that wired headphones are still the most popular amongst the masses due to several factors, one of which is price. "We certainly could make them wireless, and it would be easier to just run everything off of a battery," Bell said. However, cutting the cord requires one more charger to worry about, an extra clip (which BioSport sought to eliminate in the first place) and the added heft required for the earbuds themselves. The concept here was to keep the tech invisible and the ease of use the same as a regular pair of earbuds -- no extra steps or setup needed.

Unfortunately, there's no word on pricing, but you can expect the in-ear headphones to arrive in Q4.

In this article: earbuds, fitness, headphones, heartrate, heartratemonitor, in-earheadphones, intel, runkeeper, sms, smsaudio
All products recommended by Engadget are selected by our editorial team, independent of our parent company. Some of our stories include affiliate links. If you buy something through one of these links, we may earn an affiliate commission.