Citizen journalism game will show how your photos change the story

Before #Ferguson, Michael Brown's death was already a topic on Twitter 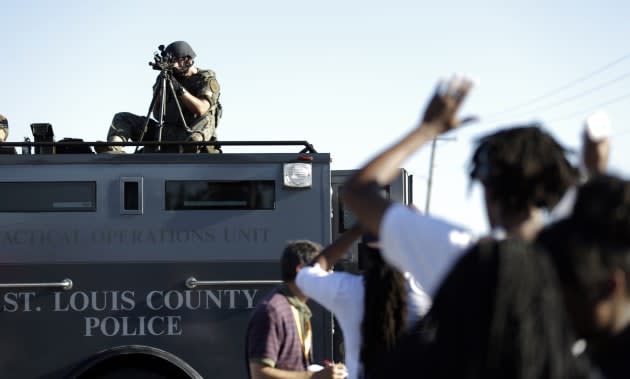 Before the protests and the armed vehicles. Before tear gas sent an Al Jazeera news crew scrambling for safety. Before people from Palestine were tweeting tips on how to endure pepper spray to marchaers in St. Louis. Before Ferguson, MO became a no-fly zone and before we became all too familiar with the burned out shell of a middle America QuikTrip, the death of Michael Brown was already on Twitter.

After the unarmed teenager was shot and killed by a police officer Saturday, protesters took to the streets in following days, met initially by a heavily armed police response. Tweets and Vines from St. Louis Alderman Antonio French or journalists like Wesley Lowery and Ryan J. Reilly (all of whom were arrested and released during the protests) gave a clear picture of events on the ground as the days progressed, and livestreams like those from KARG Argus Radio showed what the TV couldn't or wouldn't. Misinformation has also been a problem, with hoaxes and a leaked name for the officer involved (which turned out to be false) circulating.

Now, Rolling Stone writer Tim Dickinson points out (warning: graphic language and images) the tweets of St. Louis rapper/producer "TheePharoah" that captured the actual shooting and the events that followed live as they happened.

I JUST SAW SOMEONE DIE OMFG

This man saw Michael Brown get gunned down from his Ferguson apartment & tweeted in live time https://t.co/NzWigBhBMN pic.twitter.com/DK8vsCqjoM

With media helicopters grounded (after reports that shots had been fired at police helicopters) and satellite trucks pushed out under police orders, anyone paying attention to the protests was likely tuned in to the internet to see what was happening with their own eyes. Now, word that the shooting itself was livetweeted provides an even clearer look at the changing world we live in. It has taken nearly a week for the police to provide a report of the incident and name the officer involved, and it will be much longer before anyone is satisfied that all the details have been revealed to the public. But now, bystanders, media and community activists alike are reaching out to the world from where they are. We've seen the internet transform public unrest in foreign countries, and right from the start, this week has shown how much things have changed -- even when it's depressing, horrific and hard to watch -- right here in the US.

In this article: ferguson, michaelbrown, police, shooting, st.louis, theepharoah, twitter
All products recommended by Engadget are selected by our editorial team, independent of our parent company. Some of our stories include affiliate links. If you buy something through one of these links, we may earn an affiliate commission.