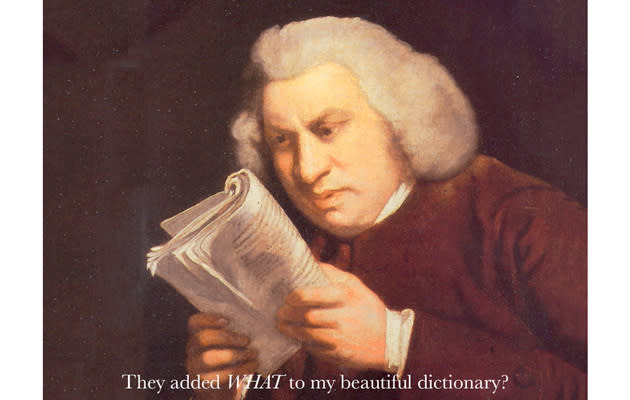 Throughout 2014's great dictionary refresh, one publication remained above attention-grabbing fripperies like adding YOLO, amazeballs and selfie to their lists. That's why we're disappointed to report that even the venerated Oxford Dictionary has now sunk down to this level. Oxford Dictionaries has announced that you can now find words like -- audible sigh -- side boob, baller, hate-watch, adorbs, amazeballs, mansplain, humblebrag, douchebaggery and clickbait to its online records. The august tome has also gone heavy on the acronyms, adding YOLO, ICYMI and WDYT, the latter standing for "what do you think?" We won't ask all of you out there what you think, because we're fairly sure you'll join us and say SMH, FML.

Update: We previously stated that these words were added to the Oxford English Dictionary. However, that's a separate entity from Oxford Dictionaries, which is referred to as a "current usage dictionary" rather than a "historical dictionary" like the OED. The post has been amended.

Oh, and still no love for Chumbumble? It's a farce, a farce I tell you.

In this article: Chumbumble, Humblebrag, Mansplain, OED, Oxford English Dictionary, YOLO
All products recommended by Engadget are selected by our editorial team, independent of our parent company. Some of our stories include affiliate links. If you buy something through one of these links, we may earn an affiliate commission.