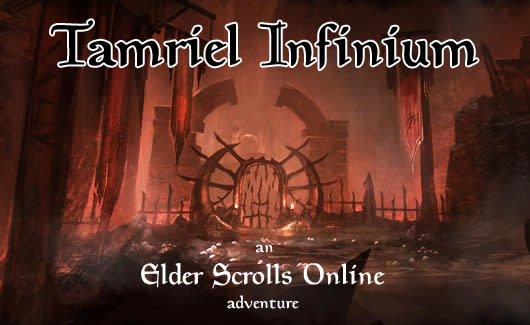 So, armor dyes! Elder Scrolls Online now has them. They're pretty slick, too, and they add quite a bit of personality and personalization options to my Tamrielian alter-ego.

The dye process is straightforward. In fact, the hardest thing about it is finding a dye station, which isn't very hard at all. You'll need to travel to a town or a major city and look for the alchemy vendor on your map. The dye station, a workbench surrounded by barrels full of color, is typically located either inside the alchemy shop or very near it in the town proper. Once you open it up, you can sort your dyes by hue or rarity and then apply them to three different color blocks on each piece of gear. ZeniMax has done a fantastic job here, as it's possible to completely change the look of even your ugliest armor bits with a few quick strokes of your mouse. The dye station interface also includes an option to show all the dyes you haven't acquired yet, and right-clicking on each one reveals the achievement necessary to unlock it.

And yeah, crafters, you read that right. You won't be making armor dyes and selling/gifting them to your fellow players. While I love the actual dyeing process and its ultimate results, ZeniMax could have had the genre's best color customization system on its hands but for a couple of poor design choices. Problem number one is the fact that Elder Scrolls' dye system is tied completely to progression. This is a non-issue if you've been around a while and have a high-level character, since you'll have already unlocked quite a few awesome colors just by playing the game and collecting various achievements along the way. It's not OK if you're just starting out and want to customize your look from the get-go. And let's face it, everybody wants to customize his look from the get-go because most newbie MMO armor is either grossly mismatched or straight out of some art team intern's Butt Fugly Summer Collection.

Tying personalization and what is largely a fluff system into the game's progression track reinforces the misguided notion that MMOs are about grind, when in fact grind is only one of the options available to players in a proper virtual world. I get that devs are always searching for ways to make players stick around, but this kind of thing rubs me the wrong way because it's both a blatant capitulation to skinner box design principles and it's unimmersive.

And as we've established before, immersion matters.

Freshly minted characters can make thousands of gold pieces within an hour of logging into ESO. Why should they not be able to spend some of those gold pieces on dyes if they want? It's not that I have anything against achievement systems, either. They're a cheap and easy way for dev teams to add "content" and provide imagination-challenged gamers with a reason to keep playing.

But I would like to see craftable/tradeable dyes in addition to the game's current color acquisition options.

And no, it's not a matter of instant gratification. I have a high-level character and therefore immediate access to more dye options than I'll ever use. It's about world-vs.-game and it's about respecting your players instead of dangling yet another grind carrot in front of them on the endless treadmill.

Problem number two with ESO's dye system is that there is too much color choice. I'm typically a no-such-thing-as-too-many-options guy, but here it's unfortunate that ZeniMax decided to put hot pink and similar hues into an Elder Scrolls game.

This is a franchise that has heretofore reveled in a gritty, grimy aesthetic, and while some people don't like browns, greys, and all the muted shades thereof, Elder Scrolls long ago decided to go for a more lived-in look and avoid the sort of clownshoes garishness found in games like WildStar and World of Warcraft. Player choice and franchise fidelity are certainly fine lines to walk, and ZeniMax did apparently discuss the pitfalls of peacock players prancing about in Power Ranger plate. Unfortunately Elder Scrolls badassery was deemed less important than enabling these types.

Don't get me wrong, here, because the colors certainly aren't a dealbreaker when it comes to the game as a whole. They're just a regrettable design choice on par with Star Wars: Galaxies' angel-winged Valentine's Day Ewoks, particularly since the rest of ESO is a grimly stylized world where silliness simply doesn't fit. And particularly since every other triple-A MMO already scratches the for-the-lulz itch. ESO was the one big-budget title where I could completely avoid the Brony crowd. Now that that's changed, I'll take some sort of eyesore-obfuscating dye toggle option, please and thank you very much ZeniMax!

Despite these two missteps, I'm happy to see ESO's armor dye system. It's another example of how the dev team is actively working to improve the game, and it's another one of those sticky MMO systems that separates virtual worlds from the genre's long-standing combat-at-all-costs malaise. The dyes also go a long way toward making my character even sexier, as if that were possible. And at the end of the day everyone knows that it's not how you play the game, it's how you look!

The Elder Scrolls Online might not be a sandbox, but it's a fine Elder Scrolls game in its own right. Join Jef Reahard every two weeks as he journeys to Tamriel and beyond in search of some extra inventory space for his crate, barrel, and bag loot. Or come kill him in Cyrodiil, if you'd rather.
In this article: armor-dyes, bethesda, bethesda-softworks, bethsoft, brony, daggerfall, dye, dyes, elder-scrolls, elder-scrolls-dye, elder-scrolls-online, eso, eso-armor-dyes, eso-dyes, factions, for-the-lulz, morrowind, oblivion, pvp, rvr, skill-based, skyrim, tamriel, Tamriel-Infinium, tamriel-infinium-jef-reahard, tes, teso, the-elder-scrolls, the-elder-scrolls-online, three-faction-pvp, three-way-pvp, zenimax, zenimax-media, zenimax-online, zenimax-online-studios
All products recommended by Engadget are selected by our editorial team, independent of our parent company. Some of our stories include affiliate links. If you buy something through one of these links, we may earn an affiliate commission.