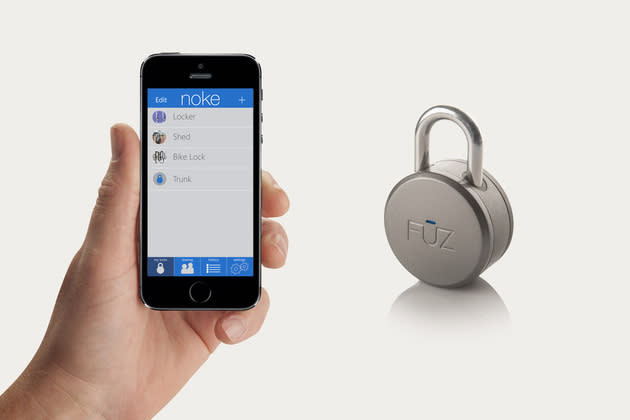 The plain old padlock is getting rather dull, but add Bluetooth to it unlocks (pun intended) a whole new level of possibilities. As the name suggests, this waterproof Noke smart padlock by Fuz Designs doesn't come with any physical keys; instead, you unlock it by first getting near it with an assigned iOS or Android device (with Bluetooth LE), and then click the Noke's hook. Better yet, you can also assign a Noke to your best pals, thus eliminating the need to pass a key around. But what if your phone runs out of battery? Well, that's where your pre-assigned click pattern comes in: Simply tap that in on the hook and your Noke will magically open up. On a similar note, the device itself can last over a year with a CR3032 battery, which can be easily replaced even when completely out of juice (but it'd still be locked, of course). Check out the demo video after the break, and then you can head over to the Kickstarter page to grab one for an early-bird price of $59. 8
In this article: bluetooth, fuz, fuzdesigns, kickstarter, lock, mobilepostcross, noke, padlock, security, video
All products recommended by Engadget are selected by our editorial team, independent of our parent company. Some of our stories include affiliate links. If you buy something through one of these links, we may earn an affiliate commission.