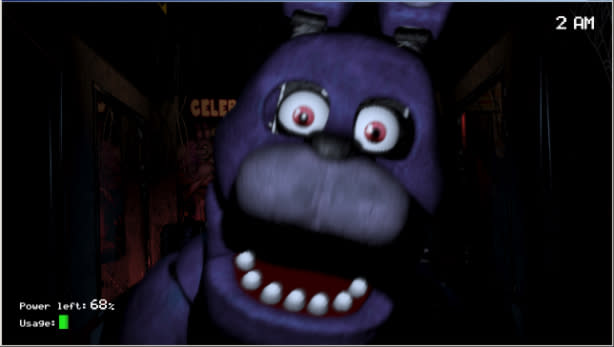 We found where the nightmares live. They reside at Freddy Fazbear's Pizza, a fictional children's eatery featuring animatronic singing animals that wander the crusty, marinara-stained halls at night.

In Five Nights at Freddy's, you're the security guard who must keep the robots at bay each night. You watch the giant animals on a series of security monitors – until your limited power supply cuts out and the lights go dark. Then all of the doors are disabled and you're at the mercy of whatever lurks behind those giant, dead eyes.

Yeah. Nightmares. Five Nights at Freddy's was Greenlit via Steam and is now out on PC for $5. One dollar for each night, or for the number of times you'll say "NOPE" and force quit the game. Per minute.
[Image: Scott Cawthon]
In this article: five-nights-at-freddys, horror, Indie, nightmare, nope, pc, STEAM
All products recommended by Engadget are selected by our editorial team, independent of our parent company. Some of our stories include affiliate links. If you buy something through one of these links, we may earn an affiliate commission.