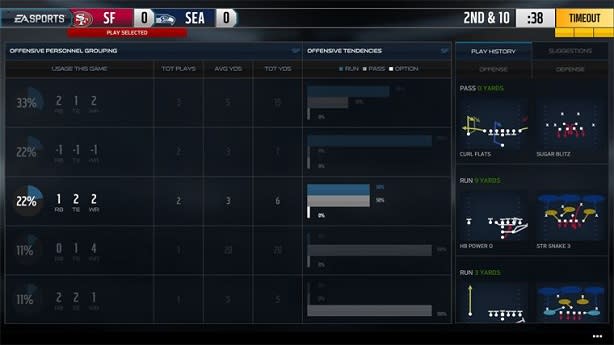 EA Sports will bring its playcalling and analysis app, CoachGlass, to the PS4 version of Madden 15. The second-screen features for Madden 25 will be marginally enhanced this year, offering players charts that quickly display their opponent's tendencies on either side of the ball, such as blitzing percentages and the amount of run, pass and option plays the opposing team tends to call. Additionally, players will be able to call offensive plays and use their timeouts from the app.

The initial concepts for CoachGlass were briefly shown during a trailer for Microsoft's SmartGlass app during its E3 2012 press conference. EA bypassed SmartGlass features for Madden 13 that year before introducing CoachGlass for Xbox One players in last year's game. Given that EA Tiburon only noted that CoachGlass will be available for PS4 and Xbox One players this year, it seems those with Xbox 360 and PS3 copies of the game won't be able to use the app. Madden 15 will launch next Tuesday, August 26.
[Image: EA Sports]
In this article: CoachGlass, data, EA, EA-Sports, ea-tiburon, Electronic-Arts, football, madden, madden-15, madden-nfl-15, microsoft, nfl, playcalling, playstation, ps4, second-screen, SmartGlass, xbox-one
All products recommended by Engadget are selected by our editorial team, independent of our parent company. Some of our stories include affiliate links. If you buy something through one of these links, we may earn an affiliate commission.