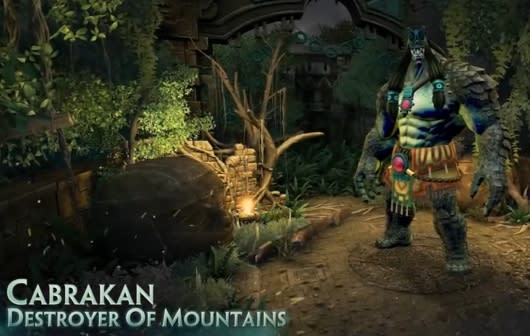 SMITE has a new plan to raise money for its World Championship prize pool called The Odyssey. Basically, the Odyssey program allows players a limited-time window to purchase exclusive items and sets for the game that will never be sold again. Part of the proceeds from those sales will go into the prize pool for the championship.

In other SMITE news, the game has added a new Mayan god. Cabrakan is a "destroyer of mountains," which is a good thing if you have a mountain coming at you down a lane. He's good at crowd control, protecting allies, and blocking enemy progress.

We've got videos on both Cabrakan and the Odyssey program for you to watch after the break.

In this article: cabrakan, champion, f2p, free-to-play, god, hero, hi-rez, hi-rez-studios, moba, multiplayer-online-battle-arena, odyssey, Smite, the-odyssey, trailer, trailers, video, videos, world-championship
All products recommended by Engadget are selected by our editorial team, independent of our parent company. Some of our stories include affiliate links. If you buy something through one of these links, we may earn an affiliate commission.