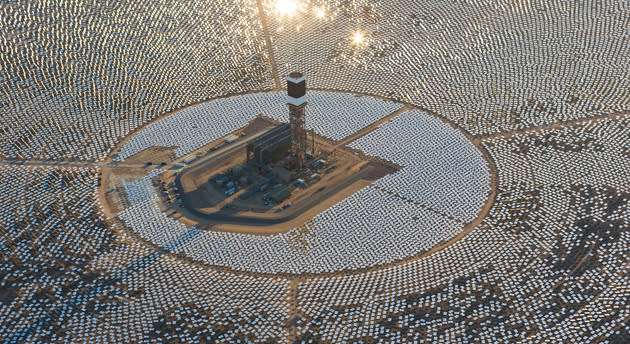 A common sight in the sky above the world's largest solar thermal power plant is a "streamer," a small plume of smoke that occurs without warning. Closer inspection, however, reveals that the source of the smoke is a bird that has inadvertently strayed into the white-hot heat above the plant's many reflecting mirrors. Because the BrightSource Energy plant near Ivanpah, California, uses supercritical steam rather than photovoltaic energy, the sun's heat is reflected off more than 300,000 mirrors to a single point, which is used to drive a steam turbine. The downside of that, of course, is that it's lethal for any wildlife that strays into the picture -- a problem that was recognized well before the facility opened, but now the government has gotten involved.

Government wildlife inspectors believe that insects are drawn to the highly reflective mirrors, which in turn lures local birds to their doom. BrightSource feels that the issue has been overblown, claiming that only 1,000 living creatures will die in a year, but the Center for Biological Diversity believes the actual figure is closer to 28,000. The US Fish and Wildlife service is pushing for more information and an accurate calculation of the deaths before California grants the company any more permits for solar plants. That's because the next planned facility, close to the California/Arizona border, is directly beneath a flight path used by rare birds like the Golden Eagle and Peregrine Falcon.

In this article: Birds, BrightSource Energy, google, Ivanpah, Solar, Solar Energy, Wildlife
All products recommended by Engadget are selected by our editorial team, independent of our parent company. Some of our stories include affiliate links. If you buy something through one of these links, we may earn an affiliate commission.