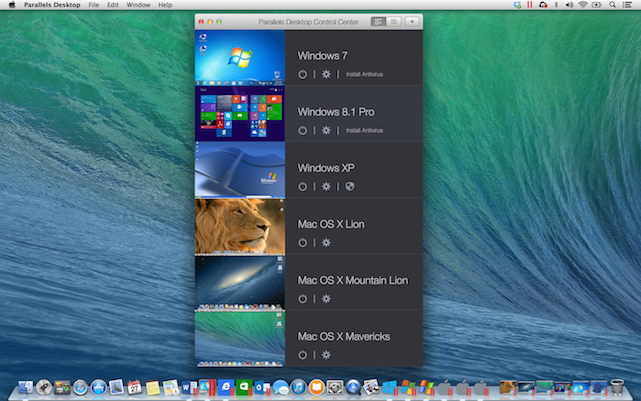 As one would expect with an upgrade, Parallels Desktop 10 provides some significant performance enhancements. Windows documents open up to 48 percent faster, battery life on MacBooks is extended by up to 30 percent, the virtual machines take up to 10 percent less of the Mac's memory, Office 2013 apps launch up to 50 percent faster, and the virtual machines now only take up as much space on the Mac hard drive as required. There's real-time optimization that compacts the virtual disk automatically.

Setup is now made easier -- new users can select what their primary usage is (design, development, productivity, games) and the VM will be optimized. All virtual machines and configuration settings are now controlled from a new Parallels Control Center, and the process of setting up Windows installations has been streamlined as well. If your Mac is currently using a particular set of regional settings, those are installed by default on the Windows VMs.

In this article: Mac, news, OS X Yosemite, parallels desktop, parallels desktop 10 for mac, software update, softwareupdate, virtual machine
All products recommended by Engadget are selected by our editorial team, independent of our parent company. Some of our stories include affiliate links. If you buy something through one of these links, we may earn an affiliate commission.