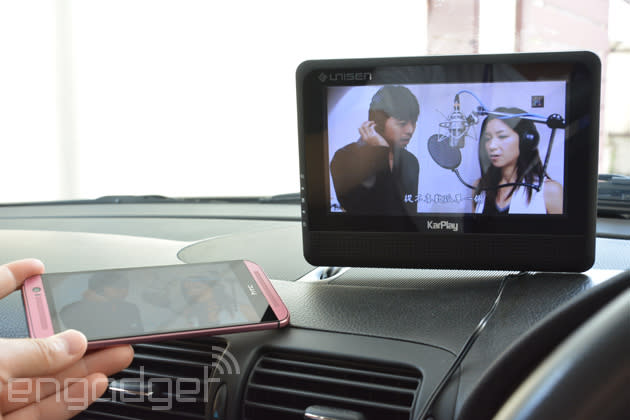 Remember the good old days when mini Bluetooth keyboards just became a thing? Then you may recall a brand called iPazzPort, who is now launching what appears to be the world's first wireless display dedicated to mobile devices. Much like the brand, the device itself is just as awkwardly named: CarKarPlay. It's pretty much just a 7-inch, 800 x 480 screen with WiFi radio for AirPlay, Miracast and DLNA connections, meaning it'll support wireless screen mirroring from iOS plus Android, as well as media streaming from DLNA-enabled apps or devices -- including some Windows Phones. As the name suggests, it's all about having a bigger screen in your car. I got to test a CarKarPlay with an iPhone 4 plus an HTC One (M8), and both worked fine: It's just a matter of connecting the phones to the CarKarPlay's WiFi hotspot, and then switching on the relevant screen mirroring protocol -- AirPlay on iOS, and Miracast on Android (usually labeled as something like "media output," "cast screen" or "screen share" in the settings menu); though the latter takes noticeably longer to connect, sometimes around ten seconds. Once sorted, I had no problem with watching YouTube videos, browsing photos or looking at the map on the bigger screen. The M8 also supports DLNA, which lets me beam images and stream music.

The CarKarPlay is listed for $150 on Amazon at the moment, and it comes with a car mount kit (or you can just use the device's kickstand), a USB car charger, a wall mount charger plus a 3.5mm jack cable for audio output. Don't expect top-notch screen quality here -- its vibrance and viewing angle are behind that of IPS screens on most phones these days. You'll also definitely want to use the bundled audio cable to plug the CarKarPlay into your car's audio system, as the built-in speakers are way too quiet (and the fact that they are rear-facing isn't helping).

Perhaps one can be more forgiving if it's priced $50 cheaper; though I also long for an advanced model with an IPS screen plus louder speakers and even an internal battery, so that I could use it more often. It should also be pointed out that protected content from the iTunes Store can't be streamed over AirPlay here, but that's nothing new.

In this article: airplay, carkarplay, display, dlna, hands-on, ipazzport, karplay, miracast, screen, wirelessdisplay
All products recommended by Engadget are selected by our editorial team, independent of our parent company. Some of our stories include affiliate links. If you buy something through one of these links, we may earn an affiliate commission.