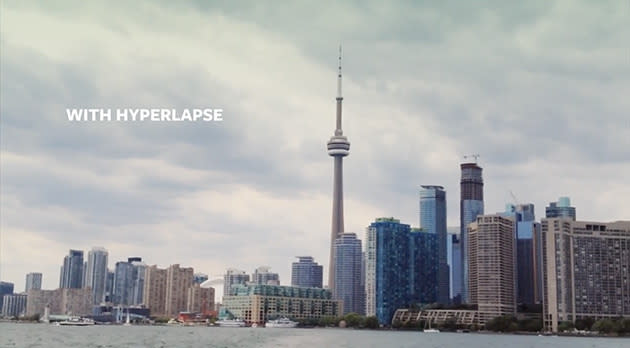 The videos you see on Instagram right now are rarely worth writing home about -- after all, most people just slap filters on them and cast them out into the social ether. As it turns out, the folks at Instagram have cooked up a new to create truly beautiful shareable videos with a new app they call Hyperlapse. In traditional Instagram fashion, it's a breeze to use: all of the heavy lifting is done behind the scenes, so all you have to do is record what's happening in front of you and choose how fast (between 1x and 12x) you want the resulting creation to play back. The end result? Some incredibly smooth, downright entrancing time-lapse videos that don't require a desktop to make.

Curiously enough, Instagram's new (and as-yet unreleased) app happens to share a name with another awfully neat bit of image processing tech. Microsoft showed off its own Hyperlapse at this year's Siggraph conference and it too smooths out the shakiness from videos captured from devices like GoPros and Google Glass. It won't surprise you to hear that Microsoft's approach seems just a bit more complex -- Redmond's Hyperlapse calculates the camera's path and chews on the geometry of the scene to create a new, smoother path to align images too, and it requires considerably more hardware to get the job done too. Alas, Hyperlapse won't hit the App Store for a few more hours at least (don't fret Android fans, you'll get it soon too), but we'll keep you posted once it does.

Update: The app is now live. Go get it, folks!

In this article: app, baraka, hyperlapse, instagram, mobilepostcross, social, time-lapse, video
All products recommended by Engadget are selected by our editorial team, independent of our parent company. Some of our stories include affiliate links. If you buy something through one of these links, we may earn an affiliate commission.