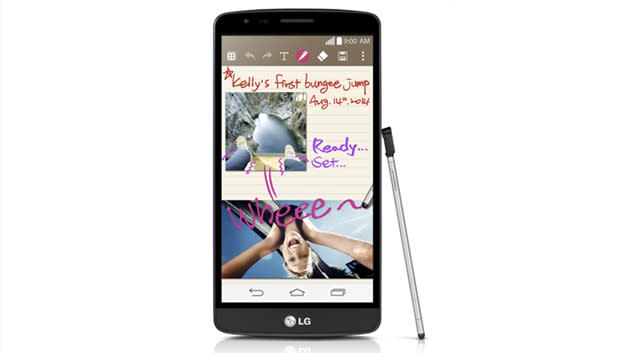 Have we reached complete, utter, smartphone product launch saturation? Nah. Here's another one. LG's latest (and not unexpected) announcement has some charm of its own, fusing a G3-esque body and UI with a 5.5-inch screen and a new stylus that looks like it'll slide into the phone. (LG's prior stylus models sometimes had the pen accessory float around separately -- it wasn't a good thing.)

It won't house the same incredible screen as the G3 flagship, unfortunately. In fact, the display is a less-than-mediocre 960 x 540 resolution, yeesh. LG's pegging the giant phone at a keener price-point -- one it hasn't shared in the announcement -- which could make an interesting option for those pining for sketching skills sans flagship prices. There's a quad-core processor, and a 13-megapixel camera without the laser-beam focus to round out the notable hardware points and it'll first land in Brazil, before rolling out across Asia and Europe. Oh and it will be making an appearance at IFA -- as will we. We'll let you know how it fares in the flesh.

In this article: g3, g3stylus, galaxynote, ifa, ifa2014, lg, lgg3stylus, mobilepostcross, stylus
All products recommended by Engadget are selected by our editorial team, independent of our parent company. Some of our stories include affiliate links. If you buy something through one of these links, we may earn an affiliate commission.