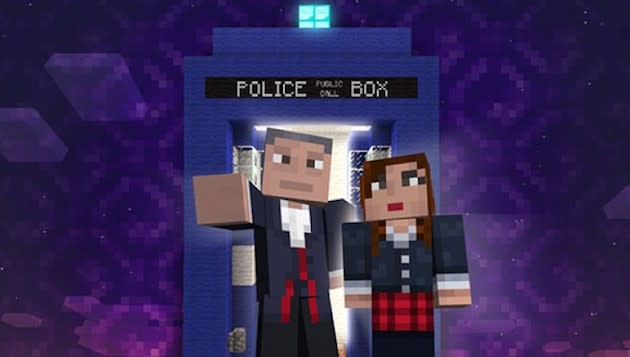 Simply put, Doctor Who and Minecraft are two worldwide sensations, each extremely popular in their own entertainment category. Thus, it just kind of makes sense to bring the two together. Thankfully for those of you who are into both, Microsoft and the BBC have partnered up to do exactly that, by way of digital downloadable content for Minecraft on the Xbox 360. Starting next month, players will have access to character packs from Doctor Who, including skins of The Doctor himself, his companions and his mad enemies -- all from throughout the show's entire history, not only from most recent seasons. No word yet on if this also applies to the upcoming Xbox One edition of Minecraft, but it wouldn't surprise us if that was the case.

In this article: BBC, BBC Worldwide, Doctor Who, DoctorWho, Dr Who, DrWho, hdpostcross, Microsoft, Minecraft, Xbox 360, Xbox360
All products recommended by Engadget are selected by our editorial team, independent of our parent company. Some of our stories include affiliate links. If you buy something through one of these links, we may earn an affiliate commission.