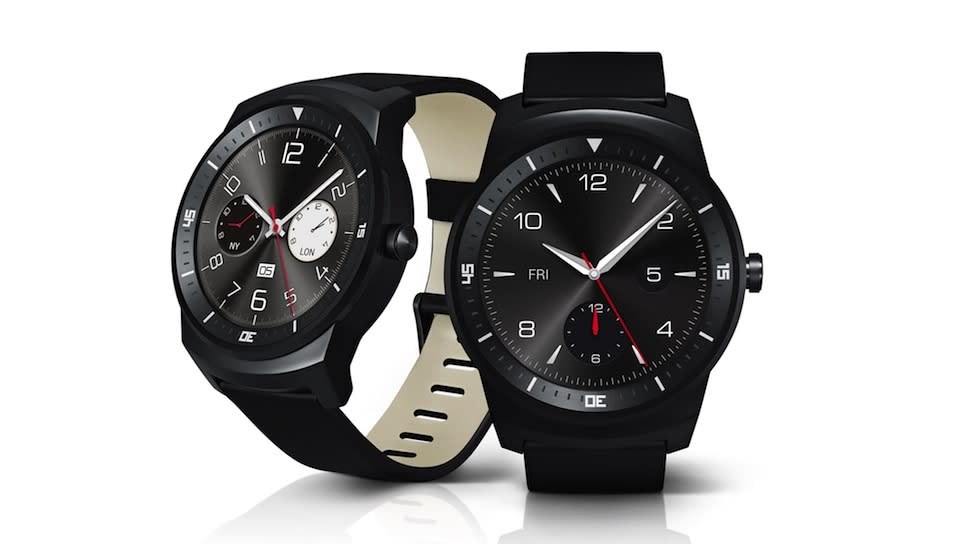 Not one to wait around for trade shows to officially begin before flaunting its new products to the world, LG is no longer teasing the G Watch R, its upcoming circular Android Wear smartwatch -- it's showing it off in all its glory. And just as the company hinted at on Sunday, it comes with a 1.3-inch Plastic OLED (P-OLED) full 360-degree display. LG says that it isn't trying to replace the original G Watch, but rather offer another choice: The R is an elegant device that looks and feels more like a classic watch than its squarish predecessor. Good timing, too, since it's going to be competing head-to-head (wrist-to-wrist?) against the Moto 360, a similarly shaped watch that will likely be available next week. Admittedly, the R's design looks like a substantial improvement over the original -- the first one looks and feels much more like a reference device than a consumer watch -- so we're excited to see how it is in real life. Unfortunately, the components don't seem to be much better than the original G Watch. The single most important factor on any smartwatch is battery life, and just like it is on LG's and Samsung's existing Wear devices, the outlook doesn't look promising; the R comes with a 410mAh battery, a mere 10mAh improvement over its square counterpart. That means we shouldn't expect to get more than a day or so on a single charge.

Nearly all of the other guts are the same, too. It comes with interchangeable 22mm straps, a 1.2GHz Qualcomm Snapdragon 400 chipset with 512MB of RAM and 4GB internal storage. It's also rated IP67 for water resistance (up to one meter of water for thirty minutes), just like the last one was. However, there's two notable new features: It comes with a heart rate monitor underneath and what appears to be a power button on the side.

One of the more interesting aspects of the R isn't what it has, but what it lacks: A black bar at the bottom of the 1.3-inch, 320 x 320 display. Motorola uses this "flat tire" on the 360, so while the front of the watch is circular, the display itself is not. Reps have explained that this bar houses the ambient light sensor and some drivers for the display. We're not sure yet if the bar's absence means that the R simply won't have these same features, or if they've been relocated elsewhere on the device. We've reached out to LG for more details. LG says that the R will go on sale in early Q4 of this year, which suggests that it'll be out in October or early November. The company isn't ready to disclose pricing, but it says that cost will vary by market.

In this article: androidwear, google, gwatch, lg, lggwatchr, mobilepostcross, rounddisplay, smartwatch
All products recommended by Engadget are selected by our editorial team, independent of our parent company. Some of our stories include affiliate links. If you buy something through one of these links, we may earn an affiliate commission.