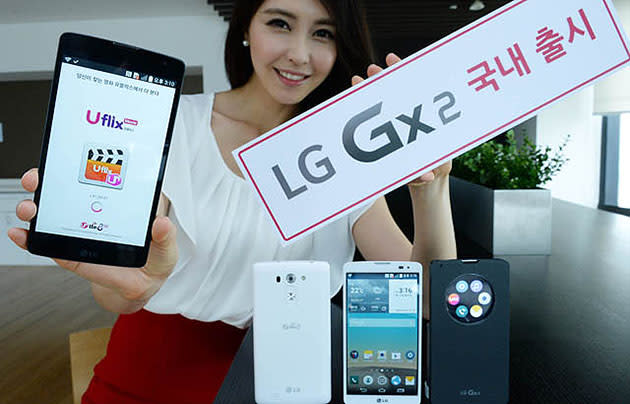 Now that LG's flagship G3 is a big success, it's pulling a Samsung by throwing esoteric spin-offs like the G3 Stylus against a wall to see if they stick. The latest is the not-so-brilliantly named Gx2 (the company already has a G2x) that packs a huge, 5.7-inch screen and laser camera focus borrowed from the G3. Other specs are run-of-the-mill: a quad-core 1.2GHz CPU, 1.3-megapixel front camera, 1.5GB of RAM, 8GB memory, 720p screen resolution and a 3,200mAh battery that should run forever. Oddly the meek 8-megapixel camera doesn't seem to deserve the laser system, but maybe there's a "focus buff" market we're unaware of. Pricing and availability have yet to be revealed, but it's likely to stay in Asia.

In this article: 5.7-inch, 720p, Gx2, korea, Laser Focus, lg, LG Gx2, mobilepostcross
All products recommended by Engadget are selected by our editorial team, independent of our parent company. Some of our stories include affiliate links. If you buy something through one of these links, we may earn an affiliate commission.