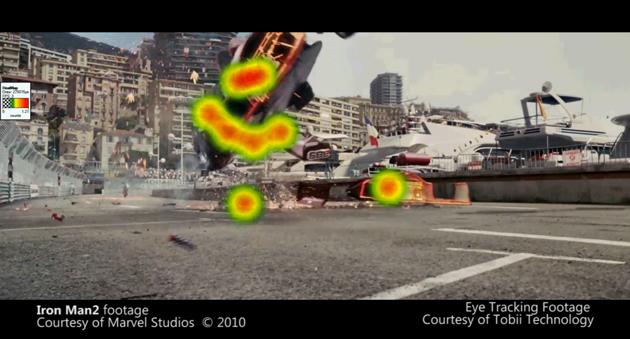 Cinema screens are huge, which is odd, because the eye can only focus on a small portion of what's in front of it at any one time. That's what prompted the Academy of Motion Picture Arts and Sciences to team up with neuroscientists from Birkbeck, University of London, who in turn recruited eye-tracking firm Tobii. The trio embarked upon a project to determine where people concentrated their gaze. Then, by using Tobii's hardware, were able to create a heat map that was overlaid on the frame, much in the same way that SMI analyzes sports matche. The conclusions from the research found that the best use of CGI isn't to make big robots at the front of the frame, but to fill in all of the spare detail that you're not looking at.

Analyzing a scene from Iron Man 2 with director Jon Favreau, he commented that the audience's attention was always concentrated on the action. That is, the obvious things like faces, movements and the model F1 car that was blown up for the sequence. Everything else in the set-piece, from the background crowds to the sweeping vistas of Monaco, however - the stuff that people aren't paying attention to - was all digitally added in afterwards. In fact, none of the principal cast even visited the principality, as the scene was shot in a car park in Downey, California.

Of course, while this does mean that there is now proof that practical, old-school effects won't ever be crowded out by CGI, we can probably expect a lot more movies to fill in their backgrounds with digital matte paintings in the future. As for foreground CGI, it's an issue that Favreau is wrestling with on his forthcoming remake of The Jungle Book. At the same event, he commented that motion capture films -- like The Polar Express and The Adventures of Tintin -- don't work because people don't believe CGI facial expressions. That's why he's going to be using real actor's heads to help the audience not feel too unsettled. If you're curious to see the clip with heat map and commentary, it's the first one down at the source.

In this article: AMPAS, Eye-tracking, hdpostcross, Iron Man 2, Jon Favreau, Neuroscience, Tim Smith, Tobii
All products recommended by Engadget are selected by our editorial team, independent of our parent company. Some of our stories include affiliate links. If you buy something through one of these links, we may earn an affiliate commission.