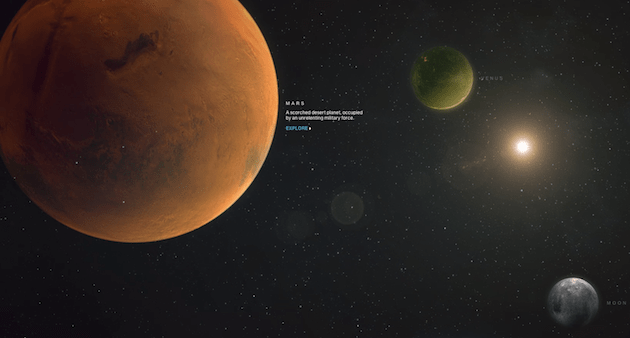 Whether it's touring an insanely large cruise ship or the Polar Bear capital of the world, Google's Street View has you covered. But the search giant doesn't want to limit that virtual experience to tangible, real-life things, which is why it's teamed up with Bungie to let you experience the magical nature of Destiny by way of Street View. Once inside, explorers can choose to wander around and learn more about places that are key elements to the storyline of Bungie's new franchise. Destiny Planet View, as the map is officially known, offers detailed, 360-degree views of locations inside Mars, Venus and the moon. It gives the breakdown on various hotspots, more information on characters from a particular territory and allows users to access Destiny tips along the way. Bungie points out that this is the first time Google's mapped a video game world, and it's a good one -- sure, it's pretty to look at, but the real goal is to get you even more hyped up ahead of Destiny's launch, next week on September 9th.

In this article: Destiny, Destiny Planet View, Google, Google Street View, GoogleStreetView, Street View, StreetView
All products recommended by Engadget are selected by our editorial team, independent of our parent company. Some of our stories include affiliate links. If you buy something through one of these links, we may earn an affiliate commission.