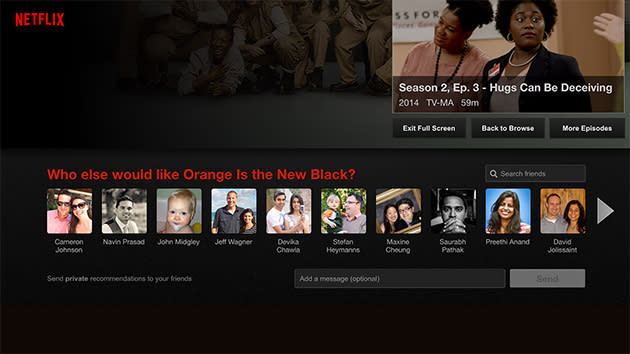 Man, [insert movie name here] on Netflix was awesome, wasn't it? Plenty of thoughtful action with just a smidge of the sappy stuff, and it didn't feel too ham-fisted either. As it turns out, Netflix doesn't just want you to recommend the film to your friends next time you see them -- the company teamed up with Facebook (again) so you can spread the good word just as soon as the show is over. The new sharing feature just went live today on just about nearly every platform that matters, including the Netflix site itself, iOS devices, PS3, Xbox, and a whole of host unspecified set-top boxes and smart TVs. Sorry Android fanatics, we're sure your time will come soon. In typical Netflix fashion, the process is pretty unobtrusive, too: once you've connected your Facebook and Netflix accounts, you'll able to choose exactly which friends your recommendation goes out to. If they opted to link their accounts in the same way, they'll get a notification the next time the log into Netflix; otherwise it gets routed to them in the form of a Facebook message. It's a shame Troll 2 isn't available anymore, because we'd probably go a little nuts recommending it to everyone.

In this article: facebook, hdpostcross, movies, netflix, recommendations, social, streaming
All products recommended by Engadget are selected by our editorial team, independent of our parent company. Some of our stories include affiliate links. If you buy something through one of these links, we may earn an affiliate commission.