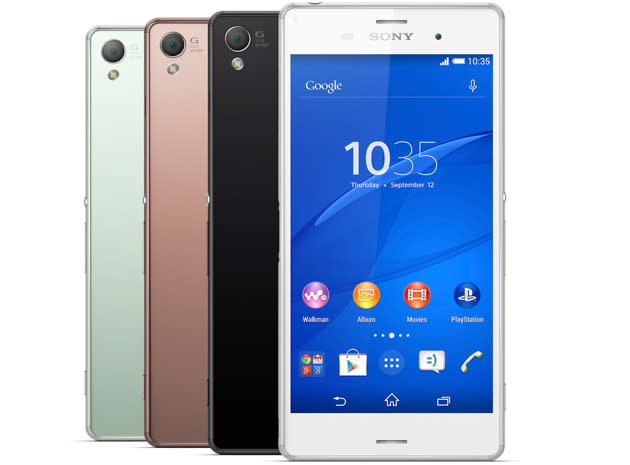 We hope you weren't getting too comfy with the months-old Xperia Z2 -- Sony has just unveiled another range-topping Android smartphone, the Xperia Z3. It's really a subtle evolution of its predecessor. You'll still find a 5.2-inch, 1080p display, a 20.7-megapixel camera and waterproofing, but there's now a more rounded aluminum frame. Sony has also added a new, wide-angle 25mm lens (to fit more into a shot) and extra-high ISO 12,800 light sensitivity. It's a little bit faster as well, with a speed-bumped 2.5GHz Snapdragon 801 processor instead of the 2.3GHz chip you saw in the Z2.

There are some new media experiences, too. The Z3 has brought its DSEE HX audio upscaling technology to improve the quality of compressed music, and there's digital noise cancelling that cuts out nearly all ambient sound. For photographers, Face In lets you capture your reaction to a shot at the same time as you take it; you can add drawings to pictures, build movies with a new editor, shoot scenes from multiple angles using multiple phones, and add sound to photos.

You'll get the Z3 sometime this fall. Sony hasn't immediately announced carriers, but there will be at least one version with North America-friendly LTE data.

Update: We've taken a closer look at the Z3 here, and T-Mobile has confirmed that it's bringing the handset to the US in the fall.

In this article: android, dsee, ifa, ifa2014, mobilepostcross, smartphone, sony, sonyxperiaz3, xperiaz3
All products recommended by Engadget are selected by our editorial team, independent of our parent company. Some of our stories include affiliate links. If you buy something through one of these links, we may earn an affiliate commission.