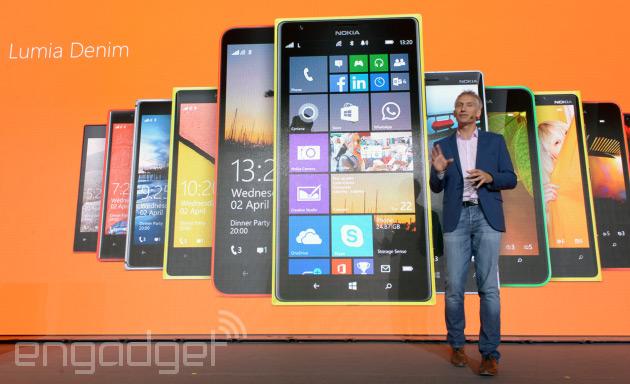 Microsoft's latest update to Windows Phone, known as Update 1, is already starting to show up on devices like the HTC One (M8) for Windows, but we still haven't seen how Microsoft Devices (Nokia's former phone division) will take it and dress it up for its Lumia lineup. Now, it's ready: The update will be known as Lumia Denim and will follow the company's Cyan refresh. In addition to the standard suite of features that come with Update 1 (such as folders), it comes with improvements to Lumia Camera and Cortana.

While most high-end Lumias have a great imaging experience, we've grown frustrated by the length of time it takes to actually take pictures; not only is the process of firing up the app slower than we'd like, it also struggles with shot-to-shot transition time. The Denim update addresses both of those, improving pocket-to-picture speed and burst shots.

One interesting feature in Lumia Camera is the ability to take a picture with flash and one without it; when editing the final image, it comes with a slider that lets you change how much light is showing up in the picture. In other words, if the image is too bright with the flash but too dark without it, you can now tweak the end result so it ends up somewhere in-between. It'll also have an auto HDR feature, and you can do a long-press on the physical shutter key to begin shooting in 4K at 24 frames per second (with 8.3 megapixels for each frame).

Denim will also come with an update to Cortana that enables users to activate the digital assistant by using hotwords "hey Cortana." Microsoft Devices says this is a feature unique to the Lumia lineup due to its SensorCore tech. The Glance screen is also getting updated with a few Bing-related items (Weather, Health and Fitness) and notifications.

Denim will first be available on the Lumia 930, 1520 and Icon, and will be ready for all other WP 8.1 Lumia devices in the fourth quarter of 2014; the new Lumia Camera will also be available for download at around the same time.

In this article: denim, lumia, lumiadenim, microsoft, microsoftwindowsphone, mobilepostcross, nokia, windowsphone8.1
All products recommended by Engadget are selected by our editorial team, independent of our parent company. Some of our stories include affiliate links. If you buy something through one of these links, we may earn an affiliate commission.