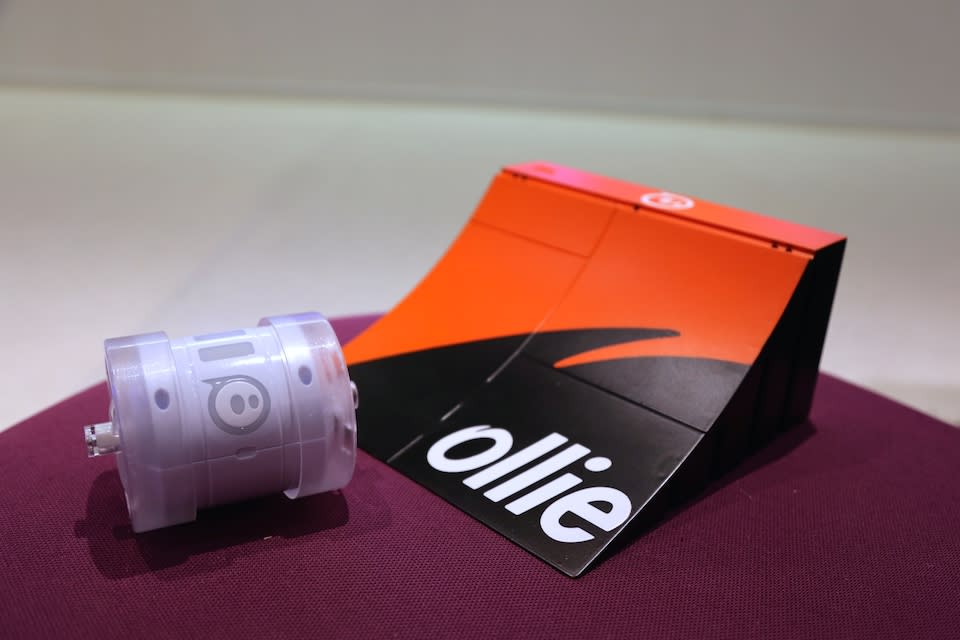 It feels like CES 2014 took place an eternity ago. To be more specific, it's been roughly seven months since we were in Las Vegas for the madness that is the Consumer Electronics Show. So why are we telling you this? Well, because that's how long it has taken Sphero, formerly Orbotix, to bring its newest robot, Ollie, to market. But, as the saying goes, better late than never. As of today, Sphero's beginning to take orders for the $99 connected device on its website, while general availability at third-party retailers (such as the Apple Store) is set to be a few days later, on September 15th. Ollie, which was originally known as Sphero 2B, isn't meant to replace the original Sphero. Instead, the company wants to make it clear that Ollie is here to expand the family, not to replace its rather popular, first- or second-generation robotic spheres.

"Ollie is like the Tony Hawk [of the family]," Ian Bernstein, Sphero founder and CTO, said to us during a demo session of the smart toy. That's a pretty good way to describe it -- Ollie can hit speeds of up to 14MPH, compared to the roughly 4.5MPH on the Sphero ball. It's pretty rugged, too, which means it can handle a ton of abuse; we ran it into a few walls several times, albeit unintentionally, and the thing just kept going as if nothing had happened. This is partially the reason why Sphero is making a great number of accessories for Ollie, including ramps, wheel covers and user-customized, 3D-printed hubcaps. While the majority of these add-ons won't be available at launch, we're told it won't be too long before they hit shelves. Furthermore, if the $99 Ollie just isn't enough for you, there is a limited edition version called Dark Side Ollie (hint: It's all-blacked out), though that one won't be shipping until November for a cool $150.

In this article: hands-on, Ollie, Orbotix, Orbotix Sphero, OrbotixSphero, Robot, Robots, Sphero, Sphero 2B, Sphero Ollie, SpheroOllie, Toys
All products recommended by Engadget are selected by our editorial team, independent of our parent company. Some of our stories include affiliate links. If you buy something through one of these links, we may earn an affiliate commission.