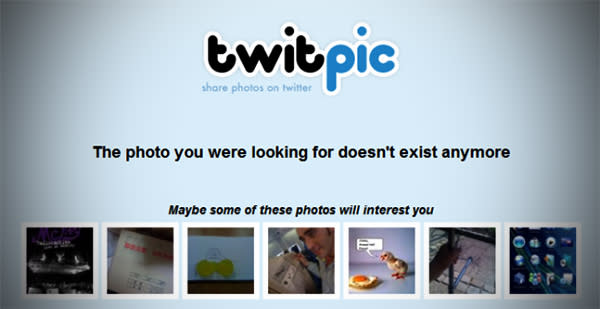 It's the end of an era, folks: Twitpic, one of the first sites that let users upload and share photos to Twitter, will go dark on September 25. Unlike other shuttered startups though, Twitpic hasn't run out of cash or been pushed out of the spotlight by fierce competitors. No, its demise is all thanks to some trademark turmoil initiated by the folks at Twitter who reached out to the Twitpic team a few weeks back. The social giant wanted the company (which at one point was valued at over $10 million) to give up its nearly 5 year old trademark application or face the prospect of being shut out of the Twitter ecosystem entirely. Rather than devote gobs of time and resources to proving his point, founder Noah Everett (sadly) decided to call it quits on the operation. Don't feel too bad for him, though: he's got another startup in the works called Pingly that basically aims to build a "better Gmail". We don't want to harp on a guy who's already down on his luck but... join the club, pal. In any case, you've still got time to download all of your stored photos from Twitpic -- just give those poor folks a little time to release the tool that'll let you do it.

In this article: deadpool, photography, photos, social, socialnetworking, trademark, twitpic, twitter
All products recommended by Engadget are selected by our editorial team, independent of our parent company. Some of our stories include affiliate links. If you buy something through one of these links, we may earn an affiliate commission.