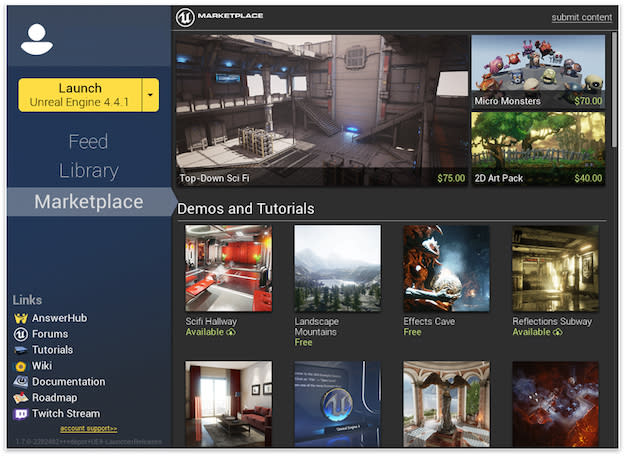 Let's say you've been fiddling with Unreal Engine 4 for months and want the world to see the lovingly detailed recreation of your first college apartment -- right down to the hemp wall tapestries and the weird stains on the living room rug. Well, with the newly launched Unreal Engine Marketplace you can do just that. In addition to anything that's been released through other channels before, your custom wares will sit alongside sample scenes and games (like Tappy Chicken), as well as bits of C++ code, art and audio. And if you're looking to turn a profit, or, at least recover the toolset's monthly subscription fee, you can even put a price-tag on your digital wares.

What's more, Eurogamer has spotted that the Unreal overlords at Epic Games have announced that in an effort to foster a lively game-development scene, they're waiving the cost of Unreal Engine 4 for schools and universities. So long as you're a student enrolled in a qualifying degree program, you'll have access to one of the most prominent game engines in the business for free. Well, there's still that pesky thing called tuition, but until you have to start paying back those student loans, that mostly feels nonexistent too. Who knows, though, maybe you could strike it big and make a game that'd cover the cost of college while you're still enrolled. If that is the case, though, you'll have to pony up the standard 5 percent royalties for on any quarterly profits exceeding $3,000.

In this article: college, education, EpicGames, gaming, hd, hdpostcross, unrealengine, unrealengine4, unrealenginemarketplace
All products recommended by Engadget are selected by our editorial team, independent of our parent company. Some of our stories include affiliate links. If you buy something through one of these links, we may earn an affiliate commission.