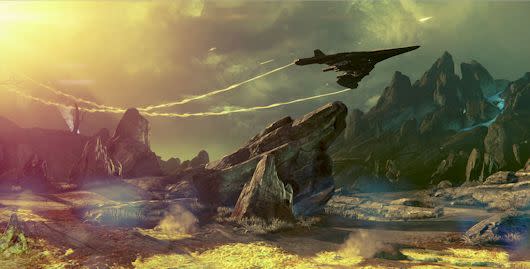 Bungie's Destiny launches next week, and since it is by most appearances an MMO (or possibly a fragrance), we've been covering it, albeit lightly since our primary audience is not a console-only audience.

But hasn't Bungie said that Destiny isn't an MMO? That was Massively reader icnoevil's primary objection to our coverage:

So if the devs themselves have said the game is not an MMO, why does it keep showing up on this site?

There's a little thing I repeat to myself every once in a while when studio reps are being pushy about our coverage: I don't work for them. I work for Joystiq.

It's specifically not my job to accept everything developers and PR people say, take it at face-value, and repeat it to our readers as if it is completely true and should be believed. That is not what I am paid to do.

Marketers and PR folks are clever people tasked with devising and promulgating a public perception about a product. Sometimes that perception aligns with reality. Sometimes it doesn't. Their task is to convince us and you of their version of the truth. My task is to present MMO news through the filter known as Massively, a filter that is primarily about MMOs by and for MMO enthusiasts and skeptics. Anyone who says he is presenting unfiltered news is lying to you unless he is literally shoving a stream of endless, random data at you, and not even a Google search of the entire internet does that. Choosing what to report and what not to report includes bias. Using the English language conveys accidental bias. Even the act of merely organizing without culling the sum of everything possesses inherent bias.

Every journalist and reader needs to know this. Writers need to be constantly aware of the threat of bias to work hard at eliminating as much of it as possible. Readers need to be aware of it so they don't go into editorials genuinely expecting pure objectivity in a subjective opinion piece. Critical thinking is a life skill that applies to entertainment, even video games.

So that's why when a studio says, "Our game is not an MMO" or "Our game is an MMO," we smile and nod, quote verbatim, and turn our skepticism up to 11. That a statement has been made is a fact. The veracity of that statement is another story, especially when we're talking about MMOs. Last I checked, the Global Commission on MMORPGs (*not a real thing) had not come to a complete and binding decision on what precisely constitutes an MMO, so for my part, I'm disinclined to passively allow a studio to define MMOs unilaterally for the entire world in such a way as to permit that studio to include its game in or exclude its game from a genre based on the whims of its PR department and audience. That also goes for shadowy words and phrases like update, patch, expansion, free-to-play, massive, alpha, beta, soft launch, "minimum viable product," "elder game," and so forth, terms that are easily co-opted and spun to create a specific impression. No, your content patch is not really an expansion in the traditionally recognized way, and it's insulting that you think we'll help you upsell it.

Studios can say whatever they like. Words change over time. But we really don't have to use their prescribed terminology, and neither do you. We don't work for them. So: Is Destiny an MMO or not?

There was a bit of confusion back when Destiny was originally announced; sources called it WoW in space, then "massively multiplayer" but "not WoW in space." It has endgame and group dungeons and raiding, dancing emotes, loot, RMT, infinite replayability, a 10-year business plan, and an emphasis on player investment and community in an always-online but still solo-friendly environment. But it has no trading, and it's console-only, which mystifies the core MMO audience -- i.e., us. Bungie senior writer Eric Osborne explained it this way last year: "There are certain places where the [MMO] tag is certainly applicable. We want to bring players together in a shared space while making everyone feel unique. That's certainly the realm of MMOs, as is that social aspect of getting people to meet one another and play with one another and form bonds and lasting relationships. [...] So there are [MMO] aspects, it's just that out of the gate we wanted to explain that it's an action game from Bungie."

In other words, it's pretty much an MMO in a sense that most MMO players would recognize, but Bungie was (probably rightly) concerned that calling it an MMO in front of its mainstream console shooter audience would scare them because of the persistent stigma attached to playing MMOs. Bungie prefers to be "reinventing the first-person shooter" by, you know, grafting it onto an MMO but shunning the term.

ZeniMax waffled on The Elder Scrolls Online the same way; it's Skyrim Online to one group and WoW in Tamriel to another. MOBA developers, conscious of gamers' fatigue for the term, have begun styling their games as MOVs ("multiplayer online versus") and MOTAs ("massively online tactical action") and similarly unpronounceable and forgettable acronyms. ArenaNet still clenches its teeth when we all call Guild Wars -- originally marketed as a sort of proto-MMOTCG -- an MMO instead of a "competitive online role-playing game" in spite of the fact it was one of the best MMOs to launch in the '00s and directly spawned an MMORPG sequel.

On the flipside of all that are the dozens of emails we get every week from developers calling their totally-not-massive-in-any-conceivable-way games MMORPGs. Where Bungie wants to avoid association with the negative aspects of the MMORPG genre, other developers are happy to swoop in and collect the positive aspects, even if the moniker barely applies. Genre popularity rises and falls.

I can't give a verdict on whether Destiny is really truly an MMO because there's no perfect consensus on what an MMO is or where the lines between MMOs and other genres are formally drawn. But it's got enough MMO in it that we can cover it at least as a pseudo-MMO, and cover it we shall. Destiny is a sweet game, but it's not the boss of me.

What should you play? Where is the MMO industry headed? How does Massively operate? Has Lord British lost his marbles? Why is the edit button on a timer? Should "monoclegate" be hyphenated? Editor-in-Chief Bree Royce submits to your interrogations right here in Ask Massively every other Friday. Drop your questions in the comments below or ping us at ask@massively.com. Just ask!
In this article: advice, advice-column, ask-massively, bias, brianna-royce-ask-massively, defining-mmos, destiny, elder-scrolls-online, featured, games-journalism, guild-wars, humor, massively-meta, meta, mmo, mmorpg, moba, moba-fatigue, mota, mov, opinion, skyrim-online, transformers-universe
All products recommended by Engadget are selected by our editorial team, independent of our parent company. Some of our stories include affiliate links. If you buy something through one of these links, we may earn an affiliate commission.