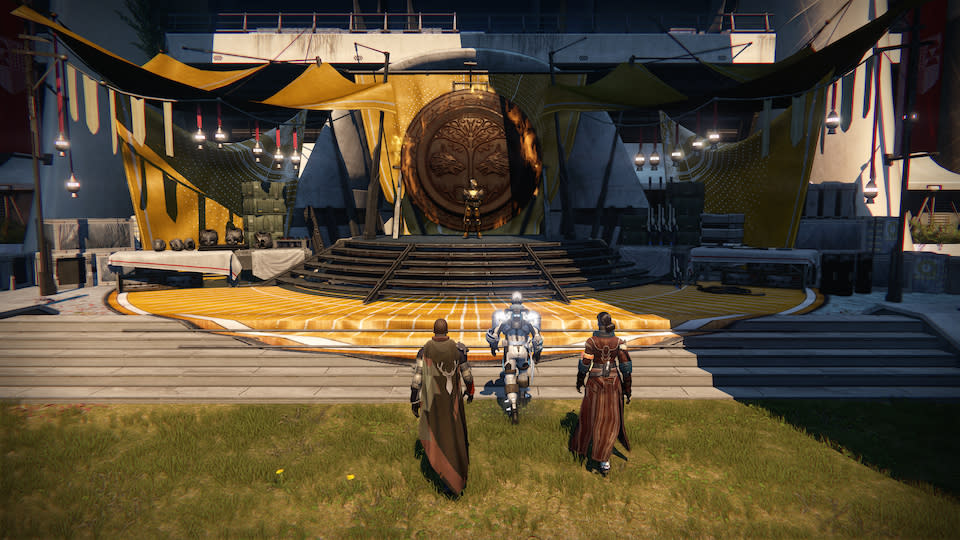 "Waffles. Waffles with Swedish fish in them!" Destiny developer Bungie's community manager Eric Osborne is telling me about his crew's Halo LAN-party ritual. Lugging bulky CRT TVs everywhere ("You didn't have a 36-inch [Sony] Trinitron Wega?" he asks), snaking Ethernet cables around a possible stranger's house, sipping Mountain Dew in the kitchen between games of capture the flag, eating lots of cheap pizza. Or, in Osborne's case, breakfast food sprinkled with candy. "That was my experience!" It's easy for him to chuckle at how ridiculous his go-to game fuel sounds in retrospect.

Back then, host advantage wasn't having non-lagging bullets -- it was knowing where the bathroom was and not having parents home. Times were a lot simpler.

When Halo 2 released in 2004, though, that all stopped. Mostly because Bungie more or less made LAN parties obsolete by taking them online with a sort of "virtual couch" that let you keep playing with the same buddies all night long in a, err, party. Fast-forward 10 years and much of the groundwork that the team laid for Halo 2 is boilerplate for any successful online game regardless of genre. Hell, much of Bungie's conventions for online play (party chat, ranking systems, game invites) are baked directly into the online infrastructure of modern consoles.

Our interview with Destiny publisher Activision's CEO Eric Hirschberg
The leap in social interactions between Halo: Combat Evolved and its sequel was nothing short of a paradigm shift, but where does Osborne see the change between its last game, Halo: Reach and its latest, the just-released Destiny?

"I don't know if you call it community or social play; I've heard some people call it 'mingleplayer.' I'm in a world; it's my story; it's my character. All the gear is mine; I've earned it in a bunch of different story missions," he says. "I encounter some random people and we do a lot of stuff together and it's super fun. But, I'm not bound to them in any way. I don't need to lug a TV or even send them a friend request."

He's speaking, of course, about Destiny's unique take on traditional single-player campaigns in shooters. Though Bungie hasn't quite come out and said the game is a massively multiplayer online title (MMO) like World of Warcraft, at its core that's what the game is. When you start a new character, you drop into a world, quickly find an assault rifle and start shooting at aliens. In pretty short order, it becomes apparent that you aren't alone. There are hundreds (if not thousands or even millions if pre-order numbers are to be believed) doing the same thing as you, and some are even doing it right alongside you. Should you desire, you can jump into their pick-up group -- or, as they're called in Destiny -- a fireteam, and fight through scads of aliens together without much effort. "In previous games, sending a friend request took you out of the flow of gameplay," Bungie's server software engineering lead Roger Wolfson says. He describes meeting someone online, then backing out of the actual game and wading through layers of menus and a massive list of recent players, just to interact with someone that you just met. It's a hassle.

"And then you find out they're a racist later," Osborne says. He's joking, but unfortunately that situation isn't far from the truth.

It's why I, and most people I know, choose to not play online with anyone but a carefully curated group of friends. For me, it helps preserve a shred of that LAN experience.

"A lot of times, you want to have a multiplayer experience where you don't want to have to send a friend request," Osborne says. "It can take a lot even in person to say, 'Oh, I'll give that person my phone number.' Or, 'I'll give that person my email address.' We're cognizant that these types of things need to be lightweight and positive -- that's where the term 'mingleplayer' comes from."

This, more than anything, is what Bungie thinks sets Destiny apart from any of its previous games: It's taking all of the knowledge of how people interact online and how people want to interact online, that it's gleaned even since launching Minotaur on the Mac in 1992, and putting it into motion. It's what the team refers to as "lightweight social connections" that make the difference in Destiny. Stuff like walking up to a warlock with badass armor and emoting a salute at him or her. Or, just kicking a ball around in The Tower, the in-game social plaza, with another player while she waits for her fireteam member to grab a new rifle or armor piece. That's a far cry from tea-bagging the corpse of the flag carrier you just pistol-whipped from behind. What the team is trying to do at its core is eliminate a lot of the barriers that make it hard for people to have fun together.

"It's so important to remember that what we're doing is making a game, and a game is just a rule-based system that allows people to have fun and challenge themselves, share victory and social connections," he says. "I think we're celebrating that with Destiny."

We'll fire up the waffles.

In this article: Activision, Bungie, Destiny, gaming, hd, hdpostcross, microsoft, PlayStation, Playstation3, ps4, sony, video, xbox, Xbox360, XboxOne
All products recommended by Engadget are selected by our editorial team, independent of our parent company. Some of our stories include affiliate links. If you buy something through one of these links, we may earn an affiliate commission.