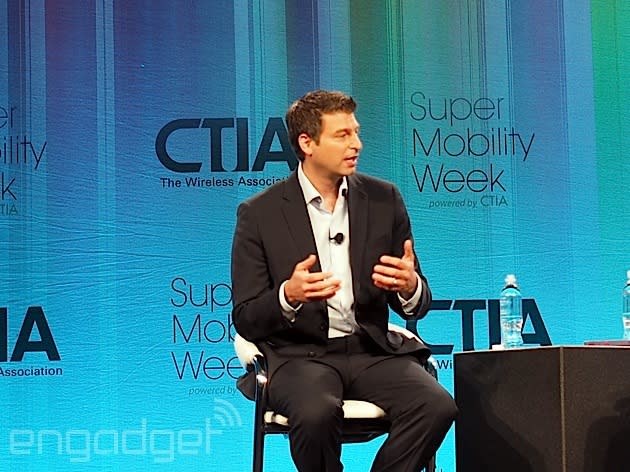 Moments after Apple announced its latest devices to the world, Twitter's President of Global Revenue, Adam Bain, came on stage at CTIA to give his thoughts on the integration of Twitter with that much talked about Apple Watch. Twitter was one of the apps given early access to Apple's WatchKit, and was prominently featured in today's keynote in Cupertino. Not only can you read tweets on your wrist, but tweeted images fill up the entirety of the tiny screen.

In conversation with CNBC's Julia Boorstin, Bain says he finds the whole wearables field very interesting, and says it's good to be on platforms both large and small. "Promoted videos [for example] look better on a larger screen," he said. Yet he also thinks the mobile nature of Twitter fits very nicely with a watch. In the physical world, you glance at your wrist multiple times a day, he says, and a lot of people do the same with Twitter. Marrying the two together makes sense and having Twitter available on wearable devices like the Apple Watch would make the service more accessible than ever. Further, he highlighted the personal nature of getting tweets on your watch, stating that connections and emotions could be "more dramatic" than before.

But wait, does that mean we'll see Twitter ads on the Apple Watch? While Bain was hesitant to answer that question, he didn't rule it out. "Every new device sets new rules," he said, saying that it was far too early to talk about anything of the sort just yet.

Bain was also asked about Apple Pay and if that hinders or helps Twitter's recent mobile commerce efforts. Essentially, no, it wouldn't hurt them. "Anything that reduces friction of payment on mobile devices is a good thing," he said, even hinting that an integration with Apple Pay was possible in the future.

In this article: adambain, ads, advertising, apple, applewatch, ctia, ctia2014, mobilepostcross, supermobilityweek, twitter, twitterads, watch
All products recommended by Engadget are selected by our editorial team, independent of our parent company. Some of our stories include affiliate links. If you buy something through one of these links, we may earn an affiliate commission.