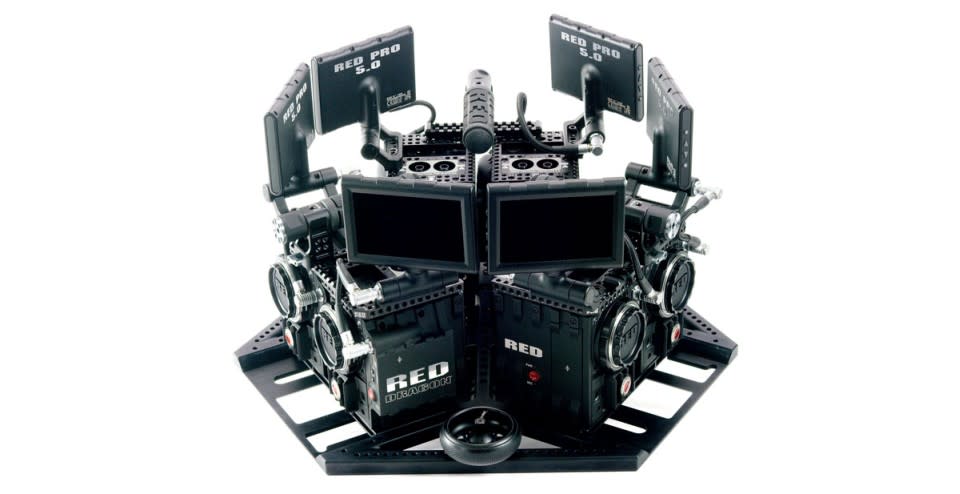 Oculus/Facebook, Samsung, Sony, Google. We're about to be flooded with virtual reality hardware, but what about content? While John Carmack works on the gaming side, the folks at NextVR (formerly Next3D) have been developing camera rigs to record live video in full surround that will let VR units put you anywhere in the world you want to go, and here's the latest one. Red Camera's Jarred Land spilled the beans, posting pics of this "Virtual Reality Camera System" which links six of his company's 6K Dragon cameras together in a rather monstrous-looking array. There should be demo footage on display at the IBC conference, but based on what we've seen from NextVR already, the potential is high. There aren't any cameras pointing up (or down) but previous systems from NextVR have used fisheye lenses to expand their range, and we expect something similar would be in store for this. NextVR is providing video to go along with Samsung's Gear VR headset when it launches and it's working with Oculus too. Judging by this setup more video experiences -- whether live streamed or recorded -- will be coming to the VR space soon. 3
In this article: 6k, camera, dragon, hdpostcross, nextvr, red, video, VirtualReality
All products recommended by Engadget are selected by our editorial team, independent of our parent company. Some of our stories include affiliate links. If you buy something through one of these links, we may earn an affiliate commission.