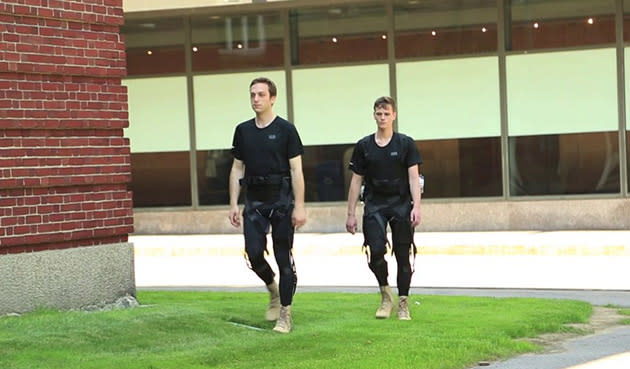 When someone says "exoskeleton," it's easy to imagine a clunky contraption made of metal, like the one we typically see in the news courtesy of various research groups, or in movies like Edge of Tomorrow. The exoskeleton that Harvard's Wyss Institute is developing, though, doesn't look like it was torn off a robot: it's called the Soft Exosuit, and as its name implies, it's lightweight and made of fabric. Wyss has actually been working on the Soft Exosuit for years, but now DARPA has granted it a $2.9 million funding under its Warrior Web program to further its development. Its current iteration is really more like smart clothing that can be worn like pants, designed to mimic how leg muscles and tendons move and to support the users' joints as they walk. That's made possible thanks to the strategically placed straps around the legs that contain flexible sensors -- all controlled by a low-power microprocessor.

DARPA's Warrior Web program seeks new technologies to prevent injuries in soldiers, so it's safe to say that the Soft Exosuit will be used by the military when it's ready. Its creators believe that it could also be used by healthy, ordinary people, though, to lengthen the distance they can travel by foot without being consumed by fatigue. Of course, the team also plans to collaborate with clinical partners in order to develop a medical version for patients with limited mobility. Now we're just waiting for the Wyss researchers to team up with the TitanArm inventors at UPenn for the ultimate full-body suit.

In this article: DARPA, exoskeleton, harvard, medical, military, research, science, video, WarriorWeb, WyssInstitute
All products recommended by Engadget are selected by our editorial team, independent of our parent company. Some of our stories include affiliate links. If you buy something through one of these links, we may earn an affiliate commission.