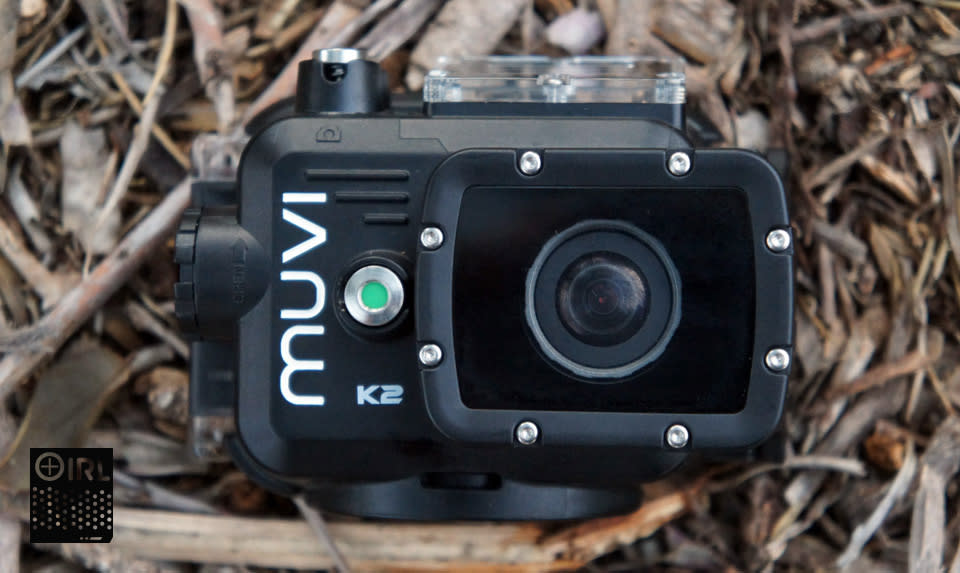 ​Who doesn't love adventure? Or, at the very least, the idea of it. I won't lie -- that's what appeals to me most about action cameras: It's the potential adventures they promise. The scuba diving trip you haven't taken yet, or the white water rafting you've yet to enjoy. With a dedicated action camera, you're one step closer to making it happen. Like getting some fancy new trainers to spark off that exercise kick. The problem is... I've become a bit of a collector. I have a shoebox full of these things, and I just can't stop myself from eyeing up the next one. On this occasion, that would be the new Muvi K2 series from Veho. It's not the company's first action camera -- I already tested that one some time ago. What's surprising is that Veho is back with a new model at all. It's not that there's anything wrong with its Muvi cameras; in fact, I was genuinely surprised at how good the last one was. It's more that the action camera market is already saturated, dominated by one company in particular. Whatever the reason, Veho did make a new rugged camera, and it's called the Muvi K-Series K2.

The model I tried was the K2NPNG edition. It's the top-of-the-line one that comes with all the bells and whistles. It also comes in a manly case that looks like it should house a power drill. It's just a carry case (and that's cool enough in itself), but it really is a great presentation -- much better than the packaging GoPro's equivalent Black edition comes in. Along with the camera, the NPNG edition includes a bunch of accessories that include a clip-on LCD screen, waterproof casings and a stack of mounts. If there's anything I love more than an action camera, it's a well-accessorized one. I'm going to skim over how much it looks like a GoPro. Yes, it's very similar, but also, different enough that it doesn't feel like a knockoff. While it's similar in size, it's not identical, so it won't fit in the GoPro gimbal for a drone, for example (it's 10 grams heavier, too, if we're counting). It does come with an attachment so you can use any GoPro mounts/accessories though. So, if you're a collector/serial owner like me, you've likely already got plenty of things you can use with this, and I knew just the place to test it out.

Navajas is a small town on the east coast of Spain, a few kilometers inland from Valencia. It's nestled between two mountainous ridges that create a natural canyon. It's this geography that gives the town its most famous natural asset, a waterfall called "El salto de la novia." A river that runs through a gorge in the arid rocks is fed in part by this waterfall. It also happens to just be a lovely place to be, especially on a hot summer's day. The mix of shade, sun, cool water and, of course, the natural water feature, makes it the perfect spot for a dip, or a nap, depending on whatever takes your fancy. It also seemed the perfect place to take the K2 for a spin.

The biggest complaint I had with the K2 -- at least in the beginning -- was the controls. Generally, these kinds of cameras are fairly easy to use. I can navigate my GoPros, or Drift cameras almost blindfolded. The K2 is a little more nuanced. For starters, there are different shutter buttons for photo and video recording. Pressing either once will put the K2 in that respective shooting mode. To take a picture or start recording, you have to press again. Confusingly, you then push a different button to stop recording. It's therefore very easy to accidentally record long videos of your pocket. I had plenty of accidental underwater shots (of my hand).

The settings menus are similarly baffling at first glance. If you're in photo mode, and want to change the video-recording settings, you won't find them in the menu, until you jump back out, swap to video mode and then go back into settings. There are even two separate power buttons. It might be something that gets easier with practice. I hope it is, anyway. The pictures and videos themselves are pleasing enough. That said, I don't think it quite did the Spanish weather the justice it deserves. Despite great sunshine, some light clouds seemed to create problems for the light sensor, or the humidity could have been hazing the lens a little (it can still fog up, even in the case). In video recordings, this reaction to different light situations can be noticeably slow; as you move the camera, you can see the image change as it adjusts to the new light. The sharpness in the middle distance (say, if there are trees behind the subject) can be fuzzy at times, too. Color representation on the whole seemed pretty decent, though, and it's pretty quick at grabbing photos. While that sounds like something basic, it isn't always true of cameras in this category.

I think what I like most about the K2 (at least this NPNG edition), is that it's a good all-round deal. At $300, it's the same price as you-know-who's equivalent camera in terms of features. The difference being: Veho's flagship comes with a host of other accessories that would easily cost another $100 on top (the case and LCD display alone probably cost more than that). There's a trade-off here, of course: value for money compared to a more proven image chip and a strong brand name.

For me, as an enthusiast, the K2 makes a good case for a secondary (or heck, these days, even tertiary) camera. Ideal for taking a time-lapse movie (it has a mode that turns the images into a video on the camera directly), while you spend all day having fun on the mountain. It has a few other unusual video features, too, like a G-Sensor mode that starts recording when it detects motion, which could open up plenty of other creative avenues. I, for one, have only spent a relatively short time with it, but I'm already throwing it in my bag when I go places. Something I don't normally do.

In this article: action camera, engadgetirl, irl, k-series, muvi, MuviK2, veho, video
All products recommended by Engadget are selected by our editorial team, independent of our parent company. Some of our stories include affiliate links. If you buy something through one of these links, we may earn an affiliate commission.