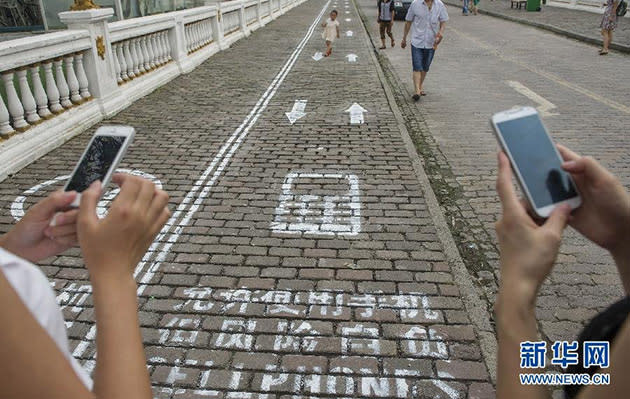 Some places have lanes for bicycles, others for motorcycles, but there's a place in mainland China that boasts a different type of lane altogether: one for phone addicts glued to their screens. According to a Chinese publication, the cellphone lane above was spotted along a place called Foreigner Street in Chongqing city, one of the five major cities in the country. The sidewalk was most likely painted on for everyone's safety, because, hey, if there's distracted driving, there's also distracted walking, as perfectly demonstrated by the woman in this video. If the idea sounds familiar, it's because the National Geographic did something similar back in July as an experiment. The society stenciled "NO CELLPHONES" on one-half of a DC sidewalk and "CELLPHONES: WALK IN THIS LANE AT YOUR OWN RISK" on the other half. The result? Well, among other things, they found that the people actually glued to their phones didn't even notice the markings at all. Typical.

In this article: china, mobilepostcross, phone-lane
All products recommended by Engadget are selected by our editorial team, independent of our parent company. Some of our stories include affiliate links. If you buy something through one of these links, we may earn an affiliate commission.