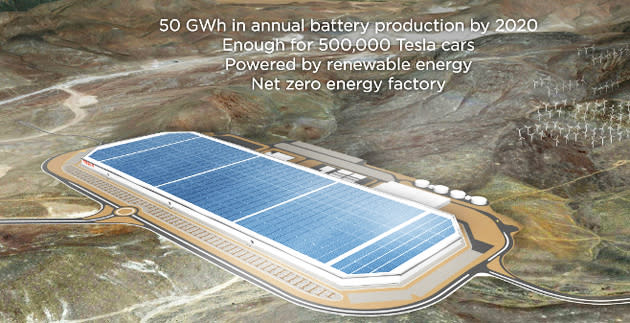 Tesla has emerged as one of the world's most exciting and successful electric vehicle manufacturers -- and now the Silicon Valley company is getting into the battery business in a big way. Tesla CEO Elon Musk just unveiled new images of the company's $5 billion battery "gigafactory" -- and he also broke the news that it will be powered entirely by renewable energy! Most vehicles fall into a specific category: sedan, pickup truck, station wagon, etc. -- but Toyota's new U Squared concept is the Swiss Army knife of cars. The insanely flexible vehicle folds out to seat up to four passengers, or you can fold down three seats and roll out an array of racks, movable rails and storage trays to accommodate everything from surfboards and bikes to bulky equipment.

In other transportation news, we showcased the world's smallest (and cutest) electric car, and designer Austin Marhold has created a tiny electric unicycle that weighs just 24 pounds and fits between your shins. The self-balancing unicycle is reportedly very intuitive to ride, lightweight and portable. A family of four recently embarked on a 6,200-mile e-bike trip across the country. If they make it, they'll break the world record for an e-bike trip, and they'll be promoting clean transportation alternatives along the way. And a man from Oregon has transformed a school bus into a rustic mobile cabin using salvaged shingles made from leftover forest cuttings.

When we think about renewable energy, solar, wind and hydropower might be the first sources that come to mind -- but they aren't the only natural sources of clean energy. Geothermal energy powers much of Iceland, and it also provides an incredibly unique water source for the country's biggest and most famous spa. The stunning Blue Lagoon, named for its milky turquoise hue, is fed by runoff water from the nearby geothermal plant, and its waters are as healing as they are luminous. Current solar technology tends to be expensive and difficult to produce -- but a team of Australian researchers found a way to change all that by upgrading existing printers to spit out a solar cell every two seconds! In other energy news, a nonprofit organization called Solar Sister is distributing solar-powered products like lanterns and cellphone chargers through women's rural networks in Africa. The Indian government recently announced plans to install as many as 2,200 solar-powered mobile communication towers throughout the country in hopes that mobile technology can push development in economically weak regions. And in Russia, a researcher is exploring whether cloud power could provide some of our clean energy and water needs. The scientist has created a tethered blimp that captures water from the clouds with a mesh that hangs vertically in the air and sends water to a hydropower plant on the ground via conduit attachments.

In design news, iPhone fans may have been salivating this past week at Apple's announcement on Tuesday, but all we could focus on was the Apple Watch, which got us all hot under the collar with its health- and fitness-tracking sensors and apps. Speaking of Apple, did you know that Steve Jobs was a low-tech parent? When an interviewer asked what Jobs' kids thought of the iPad, Jobs replied, "They haven't used it. We limit how much technology our kids use at home." We're in agreement with the idea of limiting children's access to screen-based technology for their own health and development, which is why we're thrilled that a new, decidedly low-tech Waldorf School just opened up in lower Manhattan. And as far as innovative toys go, the Dino Pet is one of the wildest we've ever seen -- the living lamp glows in the dark due to the bioluminescent dinoflagellates it contains.

In this article: eco, ecofriendly, environment, green, inhabitat, tesla, thisweekingreen, transportation
All products recommended by Engadget are selected by our editorial team, independent of our parent company. Some of our stories include affiliate links. If you buy something through one of these links, we may earn an affiliate commission.