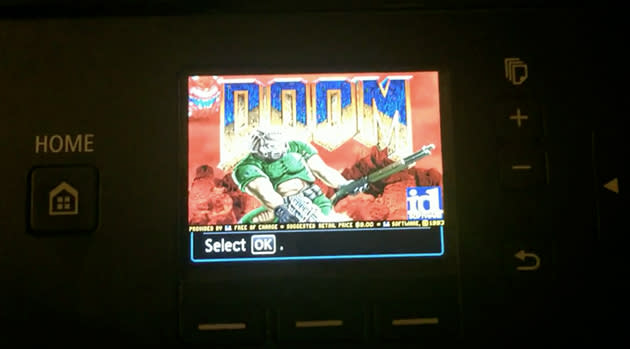 It's been over twenty years since the original Doom first hit PCs, and we're still obsessed with getting the damned thing running on just about everything with a processor. See that tiny screen up there? That's a Canon PIXMA printer that's been coaxed into running the classic shoot-em-up, thanks to a bit of elbow grease and an once-insecure web interface that lets users remotely print test pages and download firmware updates. Since you didn't need to punch in a username and password to access that interface, security researcher Michael Jordon used that oversight to get the lowly-printer to executing foreign code. The end result? Yet another device we can use in our apparently never-ending war against hellspawn (though the color palette does get a little screwy sometimes). Naturally, don't expect to pull the same fast one on your own for much longer -- Canon plans to release a fix the issue as soon as it's "feasible".

In this article: canon, doom, gaming, hack, pixma, printer, security, videogames
All products recommended by Engadget are selected by our editorial team, independent of our parent company. Some of our stories include affiliate links. If you buy something through one of these links, we may earn an affiliate commission.