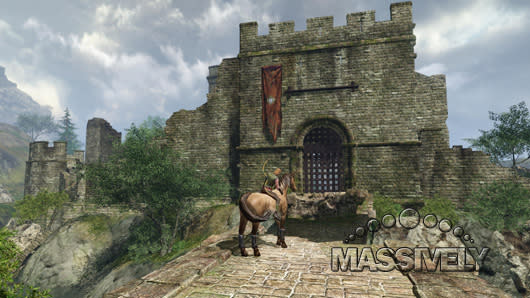 Welcome back to Massively's ArcheAge launch diary. I can't believe we're already on the third installment because there's still so much to see, do, and learn. That's a good thing, though, isn't it?

Yeah, it is, and while ArcheAge has its share of issues, its breadth and depth is incredibly welcome in a genre that's gotten far too comfortable repackaging the same tired experience. ArcheAge's story is what it is. Thus far I've gotten a Firran and a Nuian into their teens, with a Harani nearing level 10. The Firran tale is the most personally appealing primarily due to the nomadic nature of the race and the pariah status achieved by your hero pretty early on. But all of the narratives exist apart from the game mechanics, which is sadly typical for you-are-The-One stories shoehorned into the virtual world genre for monetization reasons.

The narrative is delivered via Ken Burns-style slow pans over the game's concept art. These vignettes also feature a very long-winded voiceover narrator and are supplemented with occasional NPC quest dialogue (some voiced, some not, and some still in Korean!).

Star Wars: The Old Republic it ain't, which is actually great because spending a bunch of time and development resources on talking head cutscenes with meaningless dialogue choices is a waste of what MMOs do better than single-player RPGs. ArcheAge's backstory is somewhat unique in that it comes from a series of original novels by Korean author Min-Hee Jeon. The lore is fairly deep if you want to dive into it, roleplay with it, or what have you, but in reality the only story that matters in this and other MMOs with sandbox leanings is the one you and your friends create. PvE also is what it is, and level 1-to-29 ArcheAge features a lot of it. It's absolutely the game's main focus for over half of the current progression curve, and at my current smell-the-roses speed, it's probably going to be a month or even six weeks before I hit 30. I find the kill-10-rats stuff tolerable primarily because there are other things to do when it gets old, and those other things reward the same XP. I'm talking mostly about crafting and trading here, which will get its own dedicated diary entry in the next day or two, so hold that thought.

Regarding quest-based PvE, though, ArcheAge creator Jake Song has long said that the game was intended to bridge the gap between first-gen MMO sandboxes and second-gen quest-driven themeparks. He sought to design a title that married both playstyles and gave plenty of options to a diverse playerbase. Thus far I think he and his team at XLGAMES have mostly succeeded, even though the early game features more World of Warcraft influences than I would prefer.

Ultimately I put up with that because of the non-combat stuff I mentioned above and because of the world itself. It is in fact a world as opposed to a series of lobbies and load screens. It's completely open, it's monstrously huge, and its varying topography dazzles. You will be competing with other players for mobs -- or joining them, if you're not completely anti-social! -- and you will be traveling more than you do in most themeparks, though there are fast travel options. And I love those virtual world aspects, though they're part of what makes ArcheAge a niche MMO in 2014. Let me segue from PvE and clear up a couple of misconceptions. I see a lot of comments, both here and elsewhere, about all the available land being gone, gone for good, etc. I even see this nonsense in the game's global channels, where the assertion is competing with "WoW was the first MMO" for the most irritating idiot tactic of the year.

The claim is provably false, and anyone who tells you otherwise is literally either trolling or ignorant of how ArcheAge works. Massively's MJ secured a prime spot of land in a newbie safe zone and put down a house and multiple farms well into the second day of head start. She did this without the benefit of a guild. This was on the Tahyang server, too, which is heavily populated and almost always features a queue in prime time.

Depending on how big AA's playerbase ends up being, though, not everyone will get to have the choicest plots in the safest areas. Welcome to some of AA's sandboxy mechanics.

For what it's worth, I've scoped out quite a few available farm locations here on day three across multiple faction characters, though I haven't placed yet because I'm having the damndest time deciding on a main character.

The point, though, is that the land system isn't "broken" as some instant gratification types are ranting about via social media. Housing and farming are long-term endeavors, and they're also one part of the game's competitive sandbox component. You may not get your first choice during the first week or even during the first month, which means that -- gasp -- you may have to be slightly patient and work toward one of the more desirable goals in this particular game. This is how sandbox mechanics often go, and despite its early-game pretensions to the contrary, ArcheAge isn't an everyone-gets-a-trophy MMO. And really, should it be, in a genre where almost every other triple-A title is? Let me also give you a little anecdote about ArcheAge's open PvP, since I've seen a lot of blogosphere commentary to the effect of I'd-play-ArcheAge-if-it-had-PvE servers.

I encountered three Firran (i.e., enemy) players on the road between Blackreath Keep and the Milke River late last night. This is basically still a newb-infested portion of the map, though it's a ways from the Nuian starter area. These guys definitely woke me from my quest-induced quasi-slumber, as the last thing I expected to see sashaying my way was three giant battlecats, their badass tails swishing back and forth and their riders peering over leathery saddles with what I'm sure were ganker gleams in their eyes.

For whatever reason, they left me alone. [Ed. note: PvP is not allowed in this particular area, thanks DK!] But clearly red players can cross the sea on incursions into enemy lands if they're brave enough, and I'm assuming that they can occasionally sidetrack people who just want to quest or farm or whatever.

It's worth noting that I've played 20-something hours across three different factions since head start went live and this is the only time I've seen an enemy player. But if you're strictly a soloer and the possibility of a brief detour from your planned PvE activities makes you swear, sweat, or otherwise uncomfortable, ArcheAge probably isn't your game.

If you're still curious, join me tomorrow and we'll look at what makes ArcheAge's crafting and trading so fun!

Massively's not big on scored reviews -- what use are those to ever-changing MMOs? That's why we bring you first impressions, previews, hands-on experiences, and even follow-up impressions for nearly every game we stumble across. First impressions count for a lot, but games evolve, so why shouldn't our opinions
In this article: aa, arche-age, archeage, archeage-housing, archeage-land-rush, archeage-launch-diary, archeage-pve, archeage-pvp, fantasy, farming, featured, hands-on, housing, land-rush, launch, launch-day, launches, mmo-story, mmo-travelogue, player-housing, pve, pvp, sandbox, sandpark, trion, trion-worlds, xl-games, xlgames
All products recommended by Engadget are selected by our editorial team, independent of our parent company. Some of our stories include affiliate links. If you buy something through one of these links, we may earn an affiliate commission.