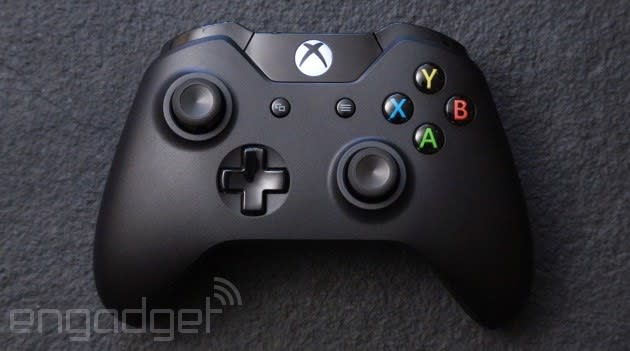 If yesterday was Microsoft's day for announcing big news (read: a $2.5 billion acquisition), today is the day it moves on to less pressing topics. The company's hardware team just unveiled a few new accessories, including a wired Xbox One controller for PC gaming, and a portable Bluetooth keyboard that can pair with three different devices at once. Starting with the controller, this is basically the same one that already ships with the Xbox. In fact, because it comes with a battery pack in the box, you could use it wirelessly with the Xbone, in case you need a second controller. Heck, even the price is the same, at $60. The only difference? It includes a USB cable, allowing you to play on a Windows PC. Unfortunately, for now, at least, the controller can't be used wirelessly with a PC. Then again, the last-gen Xbox 360 controller started as wired-only, but later got a dongle, allowing you to use it wirelessly with Windows machines. So maybe Microsoft will follow a similar timetable here as well.

Moving on, the Universal Mobile Keyboard ($70) uses Bluetooth to pair with up to three devices. It'll work with any operating system -- not just Windows -- but you can only pair with one gadget per OS at a time. Of note: The keyboard portion is detachable, meaning you could leave the tablet propped up in the built-in stand and put the keyboard on your lap. In my hands-on, I found the small buttons surprisingly easy to type on, save for the tiny Delete key. All told, too, the stand is sturdy enough to support some fairly big devices, including the 12-inch Samsung Galaxy Note Pro. Basically, you can use it with any tablet so long as it's not too thick. That means an iPad with no Smart Cover is OK, but an older-gen Surface Pro probably won't fit. Finally, Microsoft is also re-releasing its foldable Arc Touch Mouse, except this time it'll come in gray and won't have any Surface branding on it. It will still cost $70.

All of the above go on sale this fall, in time for the holiday shopping season, with the keyboard and mouse arriving in October and the controller landing sometime in November. Because no: It is not too early to start thinking about stocking stuffers.

In this article: microsoft, universal mobile keyboard, univesalmobilekeyboard, wireless keyboard, wirelesskeyboard, xbox one, xbox one controller, xboxone, xboxonecontroller
All products recommended by Engadget are selected by our editorial team, independent of our parent company. Some of our stories include affiliate links. If you buy something through one of these links, we may earn an affiliate commission.