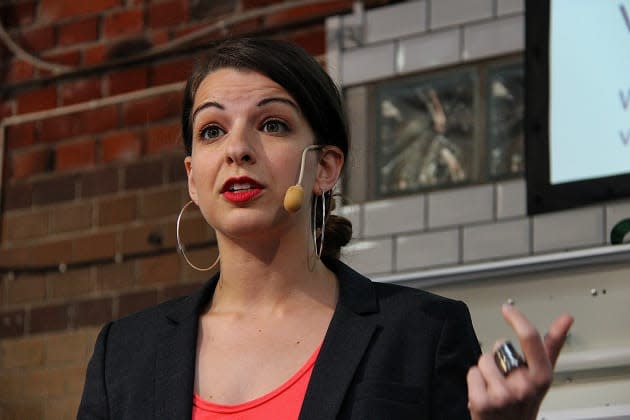 A bomb threat was made regarding a speaker and award recipient at the Game Developer's Choice Awards (part of the annual Game Developer's Conference) in San Francisco this past March. Anita Sarkeesian (pictured above), host of Tropes vs. Women in Video Games, a YouTube series that naturally examines the way women are depicted in video games, was the intended target. As Kotaku reports, an anonymous email was sent to around 25 of GDC's organizers stating the following:

"A bomb will be detonated at the Game Developer's Choice award ceremony tonight unless Anita Sarkeesian's Ambassador Award is revoked. We estimate the bomb will kill at least a dozen people and injure dozens more. It would be in your best interest to accept our simple request. This is not a joke. You have been warned."

The San Francisco police department scoured the Moscone Center's grounds (where the show is held) but came up with nothing. Any further details regarding the investigation weren't disclosed to Kotaku. Meanwhile, GDC's organizers didn't alert any of the attendees of the threat, but apparently upped security and increased random bag checks as people entered the award ceremony.

This isn't the most recent threat against Sarkeesian, and sadly will likely not be the last we hear of, either. She's been harassed since her wildly successful Kickstarter for the Tropes series (the project's modest $6,000 goal was fully funded in 24 hours and went on to amass over $158,000 in pledges) made its debut. Her website was hit with distributed denial of service attacks, her email and social media accounts have come under hacking attempts and she's been threatened that her personal contact info would be distributed to hate sites online. All before the first episode was made. Why? Because some people on the internet aren't okay with her shedding light on the fact that women are often portrayed as little more than background dressing in video games.

[Image credit: Infomastern/Flickr]
In this article: anitasarkeesian, BombThreat, feministfrequency, GDC, gdc2014, GdcAwards, hdpostcross, internet, trolls, tropesvswomeningames
All products recommended by Engadget are selected by our editorial team, independent of our parent company. Some of our stories include affiliate links. If you buy something through one of these links, we may earn an affiliate commission.