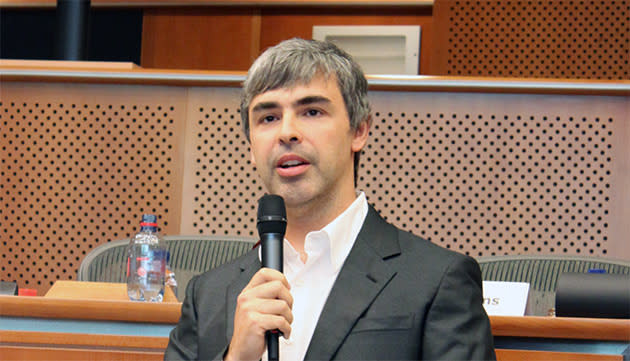 The Google we already know controls our pockets, makes sense of the web and wants to understand our behavior. That one company already has such extensive reach is pretty crazy, which also raises a weighty question: What would a Google 2.0 look like? According to a new report from The Information, CEO Larry Page has been trying to figure out just that. As the story goes, he rounded up the company's brass over a year ago to suss out what big problems were really worth tackling and to set Google's course accordingly.

Some of the concepts, like the creation of a Page-controlled research and development division, only make sense considering all the cool stuff co-founder Sergey Brin has gotten his fingers into at Google X. Still others are, as you might expect from a man worth billions, a little more out there. Consider the tedium of travel -- Page wasn't content to let Google X have all the fun trying to fix transport with its self-driving cars, so he pondered the possibility of making air travel more hyperloop-y by building a new kind of uber-efficient airport (though how it'd work is really anyone's guess). Oh, and the thought of building an entire model city apparently crossed his mind too (might we suggest a self-sufficient oil rig first?). At the very least, one of those Google 2.0 initiatives -- the company's push to make its services available to kids -- is known to be inching toward fruition.

Pushing Google to rethink its role as a major technological force in the world may seem like a big move on Page's part, but that's nothing new. He is, after all, the guy who tried to get rid of all the company's project managers (in fairness, there were only six at the time) in one shot early on in Google's life. The search giant already has a handful of moonshots under its belt, and if Page's plan sticks around, they may just be a sign of a bigger, broader Google to come.

In this article: google, google2.0, googlex, larrypage, moonshots
All products recommended by Engadget are selected by our editorial team, independent of our parent company. Some of our stories include affiliate links. If you buy something through one of these links, we may earn an affiliate commission.