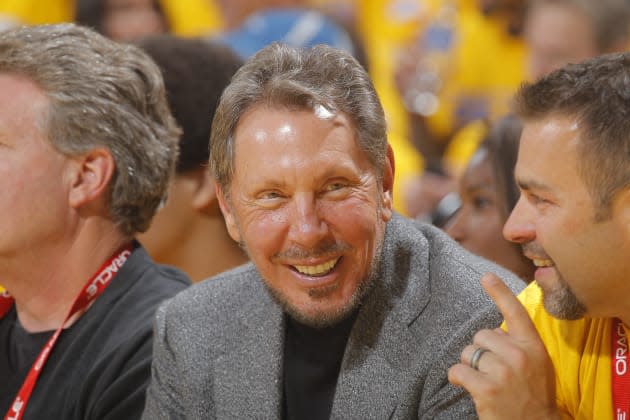 Usually the only time we talk about Oracle is in relation to its battle with Google over Java and the use of related APIs in Android, but not today. At the age of 70, co-founder Larry Ellison is stepping down from the post of CEO and moving to a new post as Executive Chairman of the Board and CTO. Taking over the reins of the enterprise software company is the duo of Safra Catz and Mark Hurd. You'll recall Hurd as the former CEO of HP, who resigned from that company over a sexual harassment investigation and false expense reports, and then became the target of an (eventually resolved) lawsuit when he joined Oracle four years ago. His awkward exit resulted in collateral damage to HP acquisition Palm, and by extension webOS. The trio of Ellison, former CFO Catz and Hurd will share responsibilities going forward, with Ellison stating in the press release that the only difference is "Safra and Mark will now report to the Oracle Board rather than to me."

Pictured above at a Golden State Warriors game, it doesn't appear that Larry is going to sink his billions into a team Ballmer-style as Oracle claims he will "keep working full time and focus his energy on product engineering, technology development and strategy." Of course, with an array of boats, planes, islands and everything else a net worth in the neighborhood of $50 billion gets you, we're figuring a vacation or two is due.

In this article: ceo, google, java, markhurd, oracle, safracatz
All products recommended by Engadget are selected by our editorial team, independent of our parent company. Some of our stories include affiliate links. If you buy something through one of these links, we may earn an affiliate commission.