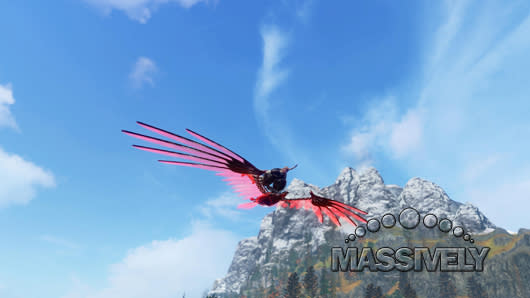 Is ArcheAge pay-to-win? That's a question I've been asked several times in recent days. Before I answer it, let's get something out of the way up front. And by "out of the way," I mean that this is the most important part of the article and needs to be emphasized in the intro.

There is no scientific or universally accepted definition of pay-to-win. Some things in this life are absolutes. Pay-to-win is not one of them. Since pay-to-win is subjective, it follows that I need to give you my definition before I can tell you whether or not I think ArcheAge fits the description. To me, pay-to-win boils down to the ability to circumvent any sort of game mechanic with real money. EA Sports used to say that "if it's in the game, it's in the game." I say that if it's out of the game and it's not a client cost or a sub, it's pay-to-win.

I don't care if all a cash shop has is "fluff" cosmetics. It's pay-to-win because cosmetics aren't fluff; they're a crucial part of my gameplay. And if I can buy a slick-looking suit of cosmetic armor with real money instead of buying it from an armor crafter or getting it as a loot drop, that is pay-to-win.

I also don't care if a cash shop restricts itself to "convenience" items. It's still pay-to-win because convenience is another way of saying "get there faster." In a competitive sandpark like ArcheAge, getting there faster -- regardless of whether "there" is max level, a certain house plot, or a trading donkey -- typically gives you power over other players.

ArcheAge takes P2W several steps beyond convenience and cosmetic items, too. Housing and farming are a big part of the game (some apparently think they're the whole game, given the bellyaching on display this week regarding land availability). In gameplay terms, houses and farms require tax certificates that cost labor point currency to produce. Or you can just open your meatspace wallet and have Trion create them for you out of thin air.

And I haven't even touched on the game's Archeum system or the changes that were applied to it between alpha and release. So AA is P2W, but should you care?

Clearly then, ArcheAge is pay-to-win. Do I care? This is the bigger issue, and the answer is both yes and no. I mean, sure I would rather it not be pay-to-win, in the same way I'd rather there be peace in the Middle East and honest elected officials. But reality intervenes, and the reality is that ArcheAge boasts more to do and see than most modern MMORPGs put together. As a subscriber and as a stop-to-smell-the-roses sort of sandbox player, I find my moment-to-moment enjoyment is largely unaffected by the latest business model brouhaha.

I can log into AA and tend farms, sail ships, do quests, play house, roleplay with friends, and PvP with enemies all without worrying about whether or not some of them paid to win. How can I do this? It's pretty simple. I enjoy the ArcheAge experience for the novelty/throwback that it is. Whether someone "wins" at it or not is subjectively irrelevant, so naturally how they win is also irrelevant.

On the other hand, if you have to be the "best" at ArcheAge or if you're hell-bent on churning through it the same way people churn through your average bank-sitting grindpark, then yeah, I'm sure AA's pay-to-win accoutrements suck pretty hard. Why is it pay-to-win?

ArcheAge was conceived in 2006 and designed around a subscription business model. It launched as a subscription title and stayed that way for many months in its native Korea, which is essentially the cradle of F2P! That should tell you all you need to know about how badly XL wanted AA to be a subscription game and a successful one.

But because of the way that F2P has zombified both the MMO market and MMO consumers since 2011, first XL and now Trion have been forced to retrofit a cash shop and all the extenuating mechanical changes onto a game that wasn't intended to support them. The devs need to get paid, and the easiest way to do that in a sub-focused sandpark is to strongly incentivize the "optional" sub and put P2W items in the cash shop.

I wish AA could go the route of Camelot Unchained, which admits that it is a niche game and which has said, in effect, that the mainstream audience isn't the target audience; CU is designed for the subscription PvP minority and it will stay that way.

XLGAMES sunk too much money into ArcheAge to publish a niche title even though it designed a niche title, so it must graft all this cash shop crap onto the game in an effort to recoup $40 million and turn a profit on a colossal eight-year project.

There's nothing to be done about this now, and I'm sure it will factor into AA's longevity or lack thereof. But it still doesn't have any bearing on the part of my brain that longs for a fun MMO. And AA is unequivocally fun from top to bottom, mainly because it has many of the sandbox features that are found in ambitious MMOs but omitted from the majority by studios scrambling for World of Warcraft's table scraps. In my humble opinion

And this is the key, for me at least. Aside from Ultima Online and maybe Mabinogi, there is no living MMORPG that lets me do the things I can do in ArcheAge. Sure I can roleplay in any game, but roleplaying as a farmer or a ship's mate in some themepark is a poor substitute for actual game mechanics that let you raise livestock or carry out your captain's orders. In other words, I'd be playing tabletop if I wanted to pretend. MMOs are for doing.

Similarly, I don't need to be the hero with a thousand faces, or even uber, for that matter. I just need a fantasy world that is in fact a world and not another pointless skinner box progression grind.

ArcheAge is that former fantasy world. It's also currently the only one in existence with triple-A production values. Those facts make its pay-to-win aspects irrelevant on a personal level. I simply don't care if it's pay-to-win or not because I don't care about winning in a virtual world context. You can't win an MMORPG. You can exist in it and enjoy yourself (or not), which is precisely the point of a virtual world and which is also precisely what MMOs have lost in their pursuit of the gaming majority.

Finally, don't mistake this rant as a defense of unethical business practices. Trion may very well cross my personal line in the future, at which point I'll probably join the chorus of commenters ripping the studio up one side and down the other. At the moment, though, ArcheAge is what it has been for a while now: a niche virtual world MMO with pay-to-win elements that prey on people who are trying to "win" a race that can never be won. Hell, they're trying to win a race that's not even a race!

Ultimately, ArcheAge is pay-to-have-fun, which I'm happy to be able to do in MMOs again and at last. In lieu of "reviews" and review scores, I present to you a list of bullet points summarizing the good and bad from the 30-odd hours I've spent in ArcheAge since the founder launch. As I wrote at the start, this is just an early-third snapshot rather than a summation of a deep, feature-packed MMO that would take many months to adequately summarize.

But don't worry because Massively's Lost Continent column is returning and will be doing just that.

Massively's not big on scored reviews -- what use are those to ever-changing MMOs? That's why we bring you first impressions, previews, hands-on experiences, and even follow-up impressions for nearly every game we stumble across. First impressions count for a lot, but games evolve, so why shouldn't our opinions?
In this article: aa, arche-age, archeage, archeage-cash-shop, archeage-launch-diary, archeage-pay-to-win, business-models, cash-shop, f2p, fantasy, free-to-play, freemium, hands-on, launch, launch-day, launches, microtransaction, microtransactions, mmo-travelogue, p2w, pay-2-win, pay-to-win, premium, pvp, sandbox, sandpark, trion, trion-worlds, xl-games, xlgames
All products recommended by Engadget are selected by our editorial team, independent of our parent company. Some of our stories include affiliate links. If you buy something through one of these links, we may earn an affiliate commission.