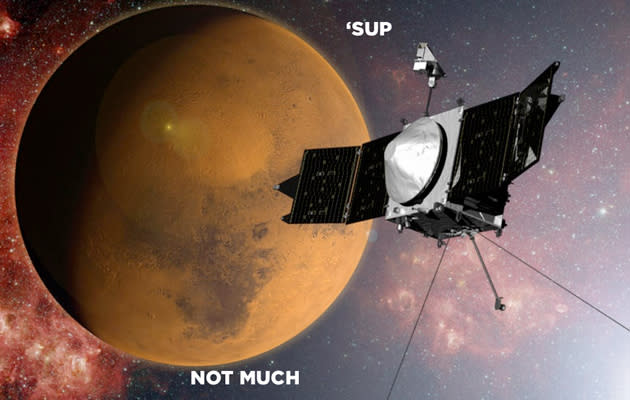 Whenever NASA achieves something, row after row of neatly-dressed mission controllers all begin whooping and clapping. The reason for today's jubilation is the news that, after nearly a year, the Mars Atmosphere and Volatile Evolution probe has successfully entered orbit around the red planet. MAVEN began its tour of duty at 10:24pm EDT Sunday night, and after a six-week test phase, will analyze the upper atmosphere of Mars in an attempt to understand how its climate has influenced the surface below. In addition, the information will help other white shirt-and-pocket-protector-wearing analysts to determine if, when, and how best to send a manned mission to Mars in the 2030s. You never know, maybe MAVEN will be able to find some Methane in the atmosphere and make David Bowie very happy.

In this article: Goddard Space Flight Center, Lockheed Martin, Mars, Mars Atmosphere and Volatile Evolution, MAVEN, NASA, video
All products recommended by Engadget are selected by our editorial team, independent of our parent company. Some of our stories include affiliate links. If you buy something through one of these links, we may earn an affiliate commission.