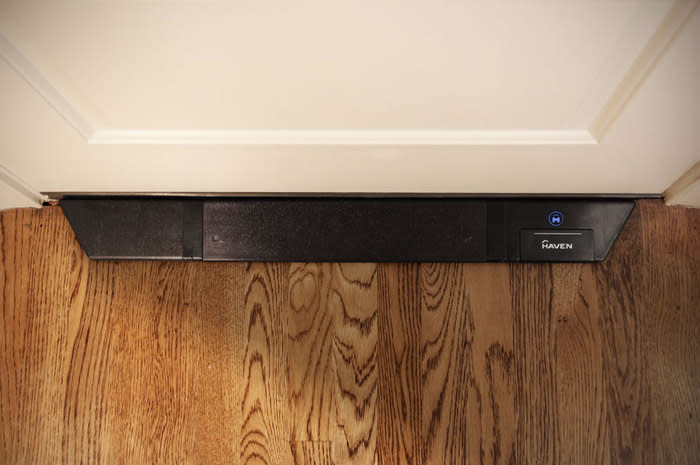 While there's certainly no shortage of connected door locks that allow keyless entry into your home, many products don't actually make the traditional deadbolt in your door any more secure. Luckily, there are some solutions that add to the security of existing locks by better reinforcing other parts of the door. Created by a former Army aviator in Iraq, Haven is a new type of smart door lock that is fixed to the floor and the doorframe, allowing you to gain entry using either your smartphone or a specialised key fob. Intruders can't pick locks or force their way in by targeting the deadlock (in fact you won't even need a set of keys) because Haven acts a powerful smart wedge that reinforces the strongest part of your door. It's so strong, it can take on a battering ram and come away victorious.

Crafted from steel, glass reinforced nylon and aluminum, the lock itself packs in a lot of tech. WiFi, Bluetooth and an accelerometer are the smart elements, which trigger alerts when someone tries to force their way in. It also has the ability to connect to other home automation products and frameworks you've already installed in your home, including Google's Nest and Apple's HomeKit, letting you decide if you want Haven to turn on the lights when it detects suspicious activity. Its makers reckon you'll get at least half a year on a single battery charge, but they've also included numerous failsafes should it be short on juice at the worst time. If you're already dreaming of a life without house keys, Haven aims to begin shipments in August 2015 if it meets its Kickstarter goal. It'll set you back $269 if you're quick, or $299 if come a little later to the party.

In this article: smarthome, smartlock
All products recommended by Engadget are selected by our editorial team, independent of our parent company. Some of our stories include affiliate links. If you buy something through one of these links, we may earn an affiliate commission.